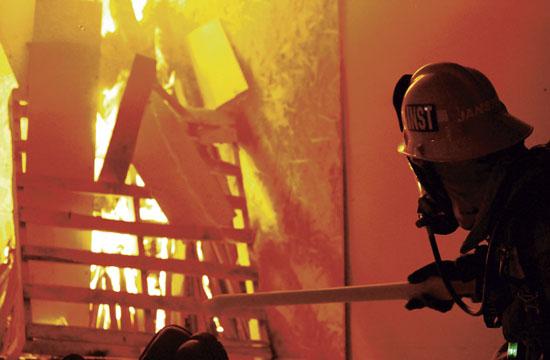 As the fire spread up the wall and flames heated the room, the heat intensified and a phoenix formed sending black clouds of smoke sideways. It moved like a current a few feet above the floor as it exited the orange illuminated room, growing and in search of space.

Suddenly, the fire leapt through an opening in the room and, hissing and crackling, it shot out into the main atrium swiftly crawling and spreading onto the ceiling in a sense that seemingly defied gravity or any sense of order.

The fire pushed back on anything it could including the atrium glass in the lobby that cracked and popped from the pressure in a defining a moment that sent shards of glass raining down on the firemen watching its behavior unfold below.

Insulated puncture-resistant fire suits made up of a mixture of Nomex and Kevlar protected the firefighters from the falling glass and the intense heat emanating from the blaze.

A senior crew of firefighters soon raced into the atrium carrying a hose originating from the fire engine parked outside, and the crew began spraying the base of the fire with the water cannon, focusing their attention on the walls.

The room filled with a soupy black and white fog that turned orange as the fire regrouped itself and started up again, battling against the fire crew providing the trainees with first hand knowledge about the nature of fire.

After 20 enduring minutes of the organized chaos, the training crew soon re-emerged from their training building located on the 1600 block of Colorado in Santa Monica, which will be demolished to make way for the Expo Light Rail Line.

The trainees emerged from the building enlightened having been part of a number of “burns” that day in their final lesson in firefighting on Jan. 29 and 30.

On Sunday and Monday, the Santa Monica Fire Department hosted the Southern California training event with some firefighters that attracted attendees from as far away as Fresno and Riverside counties.

An acquired building by the Santa Monica Fire Department served as the location where the behavior of fire was exhibited and explained to not only rookies in the firefighting forces, but also reinforced practical firefighting ideology about the nature of fire to many veterans of firefighting forces and even a few lucky policemen.

“It was a training fire, but it was more realistic than we have been doing from the last couple of days,” said Captain Dan Caldwell of the Santa Monica Fire Department about the final “burn” of the day. “They gave us two rooms that we encounter a lot with real fires in order for us to get a little bit more practice when we are having to knock down two rooms with one line.”

“Watch it light itself,” Instructor Tim Adams said during the single room burn. “Did you see that? Did you see the wall breathe and push me back?”

The trainees looked on with intensity as the fire blazed up inside of the “acquired structure” and all watched how it moved while multiple fire instructors explained what was going on and how “hydrocarbons” were involved in fueling the fire.

Afterwards and outside in a group circle that included the Santa Monica firefighter trainees, Captain Janssen talked about the importance of shielding oneself with barriers when encountering this type of intense radiant heat.

“Where your walls are meeting the ceilings you paint that corner (and) that allows the water to run down the walls and breaks that chemical reaction,” said Captain Josh Janssen of the Riverside County Fire Department. “Off gassing (of) paints, varnishes, (and) finishes, that’s the fuel. When we make our way inwards and find our room of origin, if that room is well involved like that room, there’s no reason to put ourselves into that environment. Use those doorjambs, the thresh holds, the couches, refrigerators, whatever it is to shield yourself.”

In normal circumstances, firefighters are putting out synthetic blazes caused by these Class A hydrocarbons that include common household items such as such as linins, bath towels, and mattresses.

Taking part in this training event provided Matthew Hellebrand, a rookie firefighter, with the skills he needed to combat structure fires in Southern California.

The training event “simulates live fire training that you can’t get anywhere else unless you’re dealing with an actual fire,” said Hellebrand. “Here you can stop and look at what is going on with the chemistry. It gives you a different perspective and helps you learn so the next time you are in a fire you can stop and think about what you were doing in this training drill and how it helped you, and you can extinguish the fire better, faster, and with less water.”