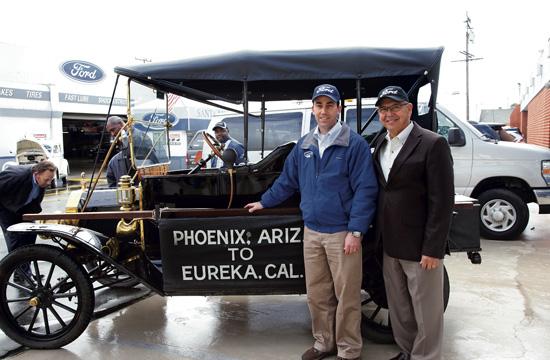 If you happened to be around Downtown Santa Monica on Wednesday afternoon, you may have noticed a century old Ford on the streets.

Driving the vintage 1912 Ford Model-T was the Harper family, who rolled into Santa Monica as part of the re-creation of a journey taken by their grandparents 100 years ago.

Their grandfather, Harvey M. Harper, his wife, and five children made a historic expedition in the winter of 1912 from Phoenix Arizona to Eureka up in Northern California.

When they got to Eureka, Harvey opened a Ford dealership, which is still owned and operated by the Harper family to this day.

Santa Monica Ford, a family-owned local dealership, hosted the stop as they themselves celebrate their 62nd year in business.

“We were very happy to host the Harper family as they make their way back up north,” said Ron Davis, owner of Santa Monica Ford. “Their dealership has reached an incredible milestone for a family owned business. We look forward to celebrating our own 100 Year Anniversary right here in the City of Santa Monica.”

Still owned and operated by the Harper family today, this milestone is a true example of a family run business that has withstood the test of time throughout the decades.

The Harper family now makes their way to Santa Barbara for their next stop and will arrive back in Eureka next week.