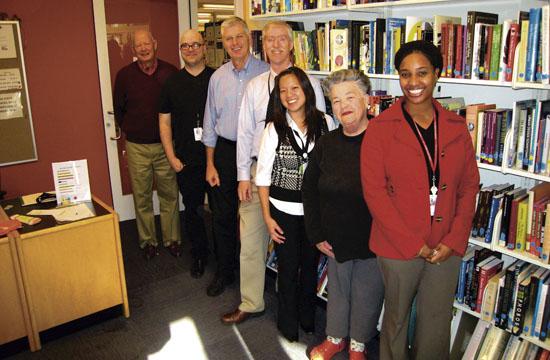 As we might with the more mundane resources of a city such as parking ramps or even streets, we could assume that public libraries will always be there when we need them and that steps will always be taken to ensure that libraries continue to serve us.

But providing a city with a good public library demands conscientious attention by those who work there and tremendous effort and support from dedicated volunteers who believe strongly in libraries and are willing to put in long hours to help them prosper.

That’s why it’s more than just good news that Santa Monica has recently been recognized for the second year in a row for its outstanding public libraries by the Library Journal in its Index of Public Library Service for 2011, and been awarded a five star rating. It was also the only library system in Southern California to earn the high rating, and that has everything to do with the system’s involved and caring personnel and the 300 member-strong “Friends of the Library” army of volunteers.

At a morning interview at the Main Library on Santa Monica Boulevard and Sixth, a group of library officials that included City Librarian Greg Mullen, Public Service Librarian Robert Graves, several Youth Services Librarians and key members of Friends of the Library, there was a warm glow of pride in the room over the fact that Santa Monica Public Library won the recognition in a review of more than 7,500 public libraries, of which only 85 were awarded five stars.

According to Mullen, the review involved per capita data relating to visitors, circulation, Internet use, and program attendance.

“What it says is that among libraries across the country, we’re providing this level of service,” Mullen said. “So we’re really proud to be in that category and recognize that we’re in a fairly unique position of being able to provide that kind of service. It means we’re well supported and we’re very well used.”

Libraries may have traditionally been all about borrowing books, but that role has changed with time and increased emphasis on providing Internet access and lending of such things as music CDs and video DVDs.

Santa Monica Public Library also earned its stars for developing programs that bring together readers with authors, audiences with music, young people with youth reading programs, family audiences with film showings, and sponsoring discussion and book groups. Put another way, public libraries – especially those in Santa Monica – are no longer your father’s public library. The library schedule in December even included an earthquake “Prep Shop” event.

Mullen is clearly a man who appreciates the success of his library system.

“This is a community that does use the library,” he said. “The penetration of people who have library cards in this community is very deep.”

Mullen cited factors in the popularity of the libraries such as families using the story time programs and seniors who come to the library who might have vision problems and want to get large print books.

The economy is also a factor.

Mullen said he believed the downturn in the economy now attracts library users who are “retooling and replacing things they have cut back on; people who need Internet for their careers or are trying something new. We are busier than ever, both in terms of circulation and in terms of people coming to visit the library.”

Mullen and Public Services Librarian Robert Graves are quick to point out that the Santa Monica Library benefits enormously from the volunteer group Friends of the Library.

The Friends provide needed funding for programs and many other aspects of library operation.

Edward Edwards, who works as a theater director and actor (you’ve seen him seen him in a current TV spot for AARP insurance where he plays a trombone), spoke with authority about the Friends.

“I’ve been on the Friends Board for 22 years; I started back in 1989,” Edwards said. “There’s been a huge explosion of youth to the library. The Friends help to enhance (library) budget, so not only do we have programming, but we have the space to do things. And it’s all only going to be used more as time goes on. Every year it’s growing, expanding. We have provided furniture and all kinds of things such that the physical space has been enhanced by the Friends.”

Most of that Friends funding comes from the busy bookstore at the Main Library, which is completely manned and operated by Friends of the Library.

Kent Lewis, co-chair of the Friends Bookstore, said he thinks of the bookstore as “a recycling center.”

“We get increasing numbers of people that come in to buy books,” Lewis said. “And bookstores have closed and we’ve become a source of cheap books.”

In fact, closing bookstores and surplus inventories from them are a big part of the donated items the bookstore sells to realize revenue.

Lewis said as many as 1,500 items might be donated to the library in a day, including one day when 10,000 books were received.

According to Lewis, libraries or bookstores close and such a windfall explains one bonanza of 100 boxes of books that were donated.

Friends of the Library board member Dolores Press pitched for more volunteer members. She explained that “the bookstore creates an opportunity for volunteerism in Santa Monica” although she thinks volunteering to work at the bookstore might be “the world’s greatest secret.”

“People don’t know about it,” Press said. “But once they’re invited, if they’re book people, they see an opportunity to volunteer.”

She’s hopeful that people might find out this is a good place to fill an empty spot in their week.

With its café, bookstore, movie theater, and plaza area, Santa Monica’s Main Library has become much more than the ‘big library’ in the system: It’s a destination and a civic center. Robert Graves, who as Public Services Librarian oversees the various library programs and events, said he believed Santa Monica’s public libraries are something akin to an energy source for reading throughout the city.

He cited the Citywide Reads program as an example of the outreach the library system has. “With Citywide Reads, everyone reads the same book over about a five week period,” he said. “We have book discussions throughout the city, a lot of them involving Friends of the Library. And Friends will buy a large quantity of the book involved so that we can give away copies and people don’t have to buy the book. We screen three or four movies a month in our film programs, films that people are grateful were brought to their attention.”

Graves also cites the “Living Library” program that promoted understanding between people by creating opportunities to ‘check out’ a person for an interview or sit-down conversation as you might a book. Programs that bring in authors to talk about books and writing are also popular, and Graves states proudly that attendance last year for programs was up 25 percent.

Much of the programming done by the library system, efforts that Mullens refers to as “other missions,” is aimed at youth.

Teen Services Librarian Erica Cuyugan said that funding for the youth programming was “a huge part of Friends.”

“There’s a Teen Writers Workshop where writers come and talk to teens and they learn about writing,” Cuyugan said. “Then they write their own pieces. Following from that, a “zine” emerges, with a publication party. There was a photography workshop, and that was the Friends. Programs you might normally need to pay for, they were all free.”

Youth Services Librarian Shana Johnson pointed out that the library had a strong teen leadership group that developed programs that interest them. One such event was a cultural festival and showcase which Johnson explains was “all run by the teens and from generous donations from the Friends.”

And not to waste any time making readers out of young people, the Santa Monica Library also has a “Baby and Me” program where parents get involved in exposing babies to books and stories.

Mullen said that “critical to development is getting babies to listen to rhythms of a sentence, the rhythms of words.”

With the opportunity of being in a room filled with people dedicated in their jobs and their volunteerism to the cause of reading, I wondered if any of them feared the rising popularity of reading devices such as Kindle and Nook.

Kent Lewis said he believed that such devices are in fact contributing to a greater amount of reading. “When you fly on a plane, you see everybody reading,” he said. “Where they would not necessarily take a book, they have a Kindle or other device. So I think it adds to the whole mix, and we’ll see more and more people read.”

Mullen called the Main Library “a tremendous facility for a city this size.”

“Cities twice this size don’t have a facility like this,” he said. “We have three more (library) buildings and we’re building another.”

For him, the goal of the Santa Monica Library was one of personal improvement by use and enjoyment of our city’s award-winning public library system.

“As someone comes through our door, we ask ‘How can we make their life better?’” he said. “How can we make them be more successful at whatever it is they’re trying to accomplish, whether it’s to entertain themselves, get the next job, academic success, or raising their child.”

For information on upcoming Santa Monica Public Library programs and a link to volunteering with Friends of the Library go to smpl.org.