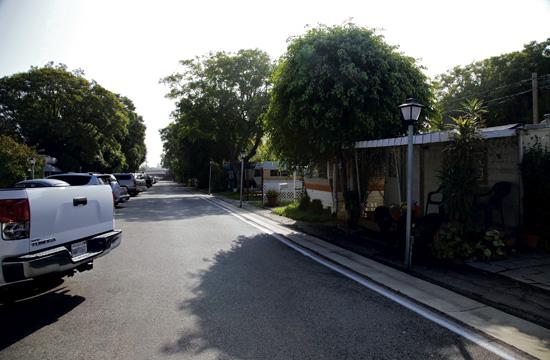 The Village Trailer Park (VTP) does not sufficiently represent the history of Santa Monica, according to a Landmarks Commission vote on Monday at City Hall that denied the auto-trailer community landmark status.

Citing a report that “raises overall doubt about the importance of trailer parks in the City’s history,” five of the seven commissioners believed VTP was not worthy of being designated a landmark.

Accordingly, VTP, which is one of two trailer parks remaining in the City of Santa Monica, will not be afforded historical preservation.

“While trailer parks were a housing type that existed in the City, this type of housing neither defined Santa Monica’s neighborhoods, nor made the City renown for trailer park living, nor influenced community land use patterns,” a staff report said. “Staff, therefore, does not find the housing type to be sufficiently important to City history for landmark status.”

The 5-2 vote was a major setback for VTP’s residents and supporters. Had VTP earned landmark status, residents would have gained leverage over developers who have attempted since 2006 to convert the area to mixed-use development.

Once a project or property is designated as a historical landmark, it generally must be preserved in its condition due to its significance to the City.

There are six criteria to determine whether a property could be designated as a landmark; only one of the criteria must be satisfied.

Interestingly enough, there was one report that claimed VTP satisfied two of the six criteria and therefore should be declared a landmark.

“The property exhibits a substantial degree of physical and historical integrity in its location, design, setting, workmanship, materials, feeling and association that manifests the architectural, cultural, economic and social history of the City of Santa Monica in the postwar era,” the study read. “As one of only two remaining trailer parks in Santa Monica … Village Trailer Park fully embodies the distinguishing architectural characteristics of the type.”

Still, five commissioners sided with the staff recommendation, which was to deny the VTP application for landmark designation.

“The Trailer Park is not extraordinary in its design and layout and does not possess any extant buildings or features of particular architectural interest,” staff recommended. “Its integrity has been significantly compromised by the removal of the central driveway median and historic landscaping and therefore it is not able to fully convey its period of significance either as an example of transient accommodations or as post-war housing.”

Making a landmark designation even more difficult was the fact that trailers, specifically, are vehicles and cannot be designated as landmarks

“The Trailer Park’s overall identity and history is heavily reliant on the presence of trailers, which are non-permanent fixtures upon the land and cannot be included in any designation and which are substantially reduced in numbers,” the staff report stated. “The remaining character-defining features of the Trailer Park are not able to adequately convey the Trailer Park’s history.”

The Landmarks Commission’s vote is not necessarily final, as VTP residents can appeal to the City Council to overturn the 5-2 decision.

Mountain View Mobile Home Park, a City-owned and managed facility, is the only other trailer park in Santa Monica.

Village Trailer Park is located at 2930 Colorado Avenue and is owned by the Luzzato Company.