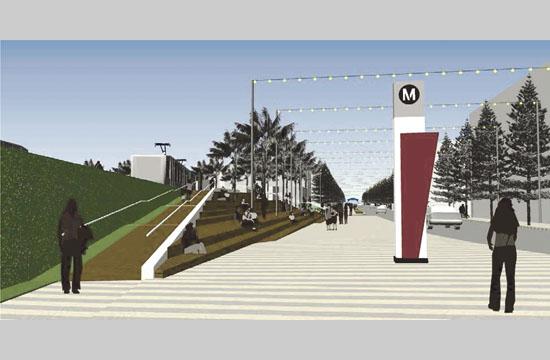 The Expo Line is still three years away from being realized in the City of Santa Monica, but council members last week peeked into the future with one of the key elements that will define the light rail’s arrival and residence: Colorado Esplanade.

Though still many steps away from being adopted, a shorthanded council studied on Feb. 14 the schematic design plans of the Colorado Esplanade, which would redefine the entire land use of the area surrounding Colorado Avenue between Fourth Street and Ocean Avenue.

Among the key attributes of the schematic design plans include a more simplified and organized “flow of pedestrians, vehicles and bicycles,” as well as “more detailed directional cues such as new signage and green street improvements that clarify pathways, improve way finding, enhance landscaping, and provide public art.”

“The proposed Colorado Avenue Esplanade Project will integrate the Expo Light Rail into the Downtown, streamlining the existing intersection functions and guiding passengers to their business, shopping, cultural and entertainment destinations,“ the staff report read. “The project accomplishes this with a combination of major urban design improvements at the Downtown Expo Station Plaza and along Colorado Avenue between Fourth Street and Ocean Avenue.”

“We think every civic space should be treated as if it’s important, not just to its community and its function, but also to its long-range goal of being something that emblemizes and extends the quality of the city and the quality of spaces that people could use,” Peter Walker said.

Also presenting to the council on behalf of Peter Walker Partners was Adam Greenspan, who spoke of the overall significance of what the Colorado Esplanade would have in representing the City.

“What’s happened through the design process is our office has really began to understand that this Esplanade has the potential to create a destination, an icon, for the city, but also to connect the North and the South,” Greenspan said. “We see the role of the design of the Esplanade as something that really focuses on easing movement in all directions.”

Greenspan went on to explain how the plans are intended to help with traffic flow, be it during weekday rush hour or weekend visitor travel.

The schematic design plans include: aligning Main and Second Streets at Colorado Street to minimize turns; a wider pedestrian area on the south side of the street; bicycle facilities; and, two lanes of one-way westbound traffic along Colorado between Fourth and Fifth Streets.

Planning commissioners considered the schematic designs on Feb. 1; the matter came in front of council members for the first time as a study session.

“We like this plan. We think it looks great. Creating what is now a back door to downtown, to convert it into a front door is a very important thing,” Rawson said. “When you get off at Fourth and Colorado, where is Downtown Santa Monica? If you are new, there really is no way to tell.”

Luisa Fish hoped the schematic designs would make its way to the Senior Commission and Disability Commission. She also asked why the schematic plans did not include any visible bus stops, a sentiment echoed by Mayor Richard Bloom and Council members Kevin McKeown and Terry O‘Day.

O’Day also suggested making better use of Fifth Street, while Bloom said he was concerned by the amount of “hardscapes” presented in the plans.

Bloom also hoped for a greater understanding of the implications of converting Colorado into a one-way (westbound only) street before council members ultimately incorporate that aspect of the plan in the final vote.

“I would hate to think that we move down the path of approving this, which is very dependent upon the one-way concept, and then find that this just isn’t going to work or there is a substantial amount of concern or opposition to it,” Bloom said.

Pier visibility from the Esplanade and the use of public art was also broached.

Still, the short-handed council seemed happy with the overall plans and hopes it continues to be refined by Peter Walker Partners and city staff.

“For the first time as a council, we are looking at what it’s going to be like to come into a Santa Monica that is not car-dominated but is multi-modal, where you arrive on a light rail, there are options for buses, for bicycles, for pedestrians, for roller skaters,” McKeown said. “This is an exciting moment in the process.”

As it was a study session, council members did not vote on the issue.

Mayor Pro Tem Gleam Davis and Council members Bob Holbrook and Pam O’Connor were both absent from the Feb. 14 meeting.