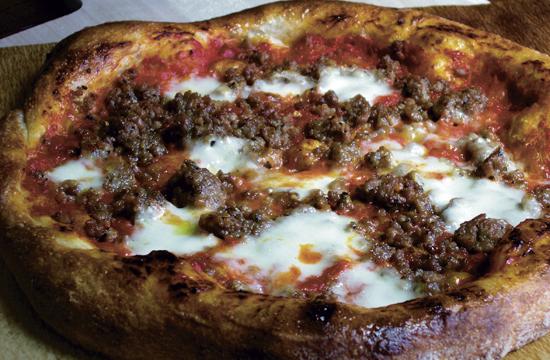 If you’ve ever been stopped in your tracks on the sidewalk by a wondrous aroma, lingered and turned in circles asking aloud, ‘What is that smell and where is it coming from,’ then you’ll know what I mean when I say I almost skipped out on standing reservations to find that food.

Despite only offering dinner through late night dining and drinking, Stella Rossa cleverly straddles every kind of evening, offering bar stools angled toward sports-blazing TVs, table seating for traditional group dining, and counter perches surrounding the kitchen for intrigued foodies – all without compromising the feeling that you’ve stepped in to a muted instagram of the Santa Monica farmers market and a casual Manhattan bar.

No wonder it’s packed every night with locals and destination diners, from open to close. And the concept of one focus but fitting for everyone is just what chef-partner Jeff Mahin wants you to remember as you saddle up to his pizza bar and hand over your stomach to a man with inked arms who ferments his dough in jars. Sure, at first glance you will wonder if there’s a Berkeley chemist in the kitchen, but upon second consideration, you’ll see that you’ve entrusted your palate to a seasonal food engineer.

A Cal graduate, the son of an engineer and a scientist, a curiosity by way of Duck Fat in London, and the influence of less is more by love of Japanese-chef Mahin promises that Stella Rossa’s menu isn’t just local and fresh, nor is it any old pizzeria. Each item is well thought out, simple, and yet it works. I’d expect nothing less from a man who put the recipe for his pizza dough through 30 variations before finalization, and yet, in true validation of intelligent simplicity, boasts plates such as fresh local burrata with organic extra virgin olive oil, sea salt, wood grilled grapes, and that famous 18-hour fermented pizza dough in toast form.

In the well-floured hands of chef Mahin and the all-knowing assistant GM Larry Scher, I gobbled and guzzled my way through Stella Rossa’s food and drink menu at a pace and quantity fit for several people and numerous visits.

To start, as we sipped an allagash white, chef Mahin described the market selection of the day (heirloom carrots roasted with butter and thyme, radishes with a spicy-garlicky olive oil for dipping, and a citrus-dressed crudo) – which were all absolutely refreshing and honest. Next we nursed a pinot gris and munched through the spinach and purple kale salad, baked goat cheese in tomato sauce, and the fresh local burrata. The minimal-yet-delicious perspective prevailed (the kale salad includes medjool dates and the burrata gets topped with grilled grapes) and continued to flourish as the three best pizzas west of the 405 (and maybe on this side of the country) lined up on the counter before me: margherita (explanatory), shaved mushroom (gruyere, melted onions, black truffle, torn parsley, rosemary, thyme), and the market selection which was a white pizza with candied bacon and shaved sweet potato.

Finally, I was food-to-mouth with the edible answer for the drool-exciting fragrance teasing the sidewalk. Crisp and chewy, succulent and addicting, there is something unforgettable about a pizza that exudes umami and unique in flavor (thank you, truffle and candied bacon) and yet doesn’t stray too far from that “cheese and bread” nostalgia that a bite of pizza should satisfy every single time.

It’s the stuff that builds a line an hour long that stretches into the street. It’s the crust and taste that gets people in their car to brave and cross the 405 during rush hour. It’s the destination restaurant that feeds neighbors nightly, and one of the only pizzerias that also does cocktails and dessert – and well, at that. Cut to me licking the tiny glass cup that (seconds before) contained the signature salted caramel crème, followed by several head-back pours of our final drinks of the night: the veneration and the honey badger, two hand-crafted cocktails that were strong enough to stand as perfect 5 p.m. tie-looseners and yet sweet enough to lean in as our second and third desserts.

A few pounds heavier we ambled out on to Main Street in an uber-aware albeit totally relaxed aura, a state of euphoria I can only assume you achieve when your food-coma collides with a pizza high. You know Stella Rossa is on to something good when you’re full and still, when you come to that spot outside where the vent is still puffing a heavenly scent in to the air that, even though you now know what that delicious smell tastes like– you still stop on the corner and linger for one last whiff.