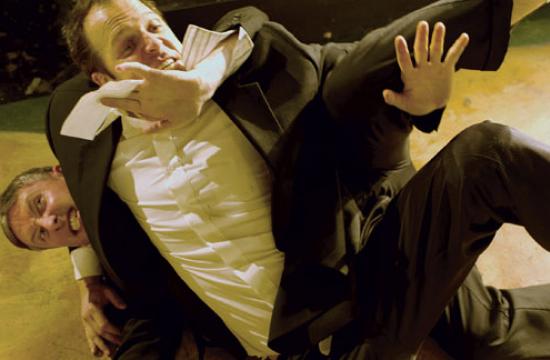 Sibling rivalry is taken to Shakespearean or Biblical proportions in this delightfully funny dark comedy about two Irish brothers whose lot in life seems to be to torment each other to the breaking point. This is the theme of award-winning playwright Martin McDonagh’s well-written play, “The Lonesome West,” the current production on stage at The Ruskin Group Theatre. His other notable works include “The Lieutenant of Inishmore,” “The Pillowman,” “Six Shooter,” and “In Bruges.”

The setting for the shenanigans takes place in a run-down country farm in Leenane, Ireland. The story begins following the funeral of the dad of brothers Valene and Coleman who “accidentally” shot dad in the head, over which neither brother exhibits any grief. Jason Paulfield captures every nasty nuance and subtlety of his complex character and gives an outstanding performance as the explosive Coleman.

These adolescents, trapped in the bodies of adult men, fight constantly – sometimes verbally, and other times denigrating into a slugfest, occasionally upping the ante with a knife or rifle. Coleman goads his brother at every opportunity, accusing him of being both a virgin and a homosexual. His greatest pastime is going to funerals where he can score free sausage rolls and vol-au-vents, a puff pastry filled with mushrooms, prawns, fruit, or cheese.

Tom O’Leary’s Valene is likewise a delightfully actualized character. He endowed him with a distinct verbal cadence and a remarkably awkward physical life, right down to a clumsy, flat-footed walk. His clothing supports his character as he wears pants that are too short exposing white socks, and a jacket that bulges around the buttons. His rubber face reflects every thought going through his limited, but conniving brain. Besides drinking poteen, (unlawfully distilled Irish whiskey) Valene’s main interest is collecting miniature Virgin Mary figurines which are neatly displayed on three shelves; a collection which Coleman despises and at one point, scoops into a bowl and puts them in Valene’s new oven, marked with a huge “V,” and turns it on.

In the middle of a row, in walks the suffering, alcohol-dependent, depressed Father Welsh, played with much pathos by Conor Walshe, who captures poor Father Welsh’s suffering and self doubts. The good priest feels inadequate and despite all his efforts, believes that he hasn’t made a difference in anyone’s life in his parish, but still pleads with the brothers to try to get along.

A major confrontation ensues when Coleman asks if he can have a bag of his brother’s chips and, of course, Valene says no. Unwilling to take no for an answer, Coleman defiantly goes to the cupboard, coughs to cover opening it, and removes a bag of chips. Then in a most defiant way, sits down at the table with Valene, tears open the bag and begins pouring the chips into his mouth with exaggerated gusto.

Their friend Girleen, nicely played by Rachel Noll, drops by for a visit and in a later, tender scene between her and the priest, Father Welsh admits that he is useless and would be leaving the “murder capital of Europe” the next day. He gives her a letter to deliver to the brothers and they hug goodbye, their lips accidentally meeting. He does “leave” the next day, but in a surprising way.

Girleen delivers the letter that is basically a plea for the brothers to get along and to forgive each other for any of grievances they carry from the past. She gets very upset because Father Welsh did not mention her in the letter and she leaves in a huff. Coleman is not very interested in the contents of the note saying, “I never saw the sense in letters – they’re just writing.” But, on learning about the priest’s real departure, they say they will honor his memory by trying to get along and hang the letter underneath a cross and over a rifle. These Abel – Cain reincarnates then make an attempt to get along. All the figurines are replaced and they decide to sit down and forgive each other for past transgressions against each other which they begin to take turns listing. In the spirit of reconciliation, Valene offers to put Coleman’s name back on deed to the farm and confessions begin with Valene confessing to peeing in Coleman’s beer which he takes calmly. But, Coleman’s hairpin trigger temper is tested when his brother confesses that he stuck a pencil down the throat of a girl he liked, and she wound up marrying the doctor who took care of her. Valene is smug and says “Try to top that one for yourself.” Coleman tries incredibly hard to not lose it and walks over to another chair and sits down. We see him plotting and know something awful is about to happen. He walks back to the table, and in one of the funniest scenes in the play, tells Valene that he cut off the ears of his dog, which he refuses to believe until Coleman brings out a paper bag containing two ears which he places on the table. As you can imagine, Valene flies into a rage and all hell breaks out. Figurines are again smashed, shots are fired at Valene’s stove, a knife is flashed and you just know that these boys will continue to fight until one of them is dead.

The farmhouse set design by Cliff Wagner is appropriately shabby and creates the right environment for this dysfunctional duo to carry out their tomfoolery, while Dan Speaker and Jan Bryant’s effective fight sequences help add to the authenticity of this excellent production.

Director Mike Reilly has done a splendid job in shaping the outstanding performances from this gifted ensemble and keeps the action moving at a brisk, but organically believable, pace. He covers the scene changes with lilting traditional Irish music, adding to the feel and spirit of this most entertaining play.