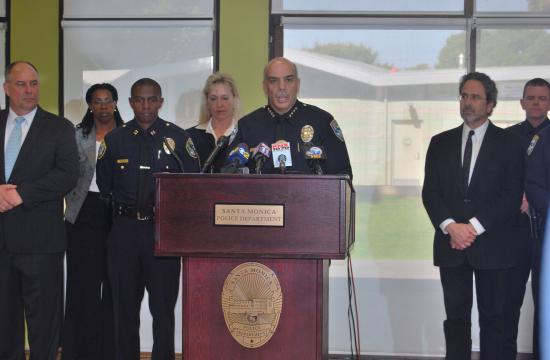 Santa Monica Police Chief Tim Jackman spent his final day on the job on Friday, March 2, with a press conference at Virginia Avenue Park, not to announce his retirement, but instead to inform the public that a suspect has been arrested in connection with the 2008 murder of Alexander Merman.

Flanked on both sides by members of the Santa Monica Police Deptartment (SMPD), Mayor Richard Bloom, and other law enforcement officials, Jackman explained the arrest that involved not only a murder but also the unraveling of a financial fraud requiring the investigation to extend as far south as Orange County’s central coast.

The murder investigation uncovered an alleged debt of $250,000 owed to Merman by murder suspect Daniel Edward Becerril II, a financial advisor who owned AP Financial Group in Huntington Beach, Calif. Also discovered was an alleged conspiracy to defraud various investment accounts of another $300,000, which, according to SMPD, was “ultimately deposited into accounts belonging to Becerril and AP Financial.”

Becerril was arrested on March 1; the arrest was made in conjunction with the Huntington Beach Police Dept. and United States Immigrations and Customs Enforcement.

“After nearly four years of investigating this case and the fraudulent activity surrounding the murder, Santa Monica Police Detectives have amassed evidence linking Becerril to Mr. Merman’s killing, which occurred shortly after he discovered Becerril’s theft of his money,” an SMPD press release stated.

Both law enforcement and city officials believe the crime may extend beyond Becerril alleged fraud and murder of Merman.

“I would encourage anyone who knows anything or has been victimized … to please step forward. Obviously this crime goes further than the murder,” Bloom stated. “We want to be sure the perpetrators are brought to justice and that every victim has his or her day in court.”

“This was a very involved and deep fraud,” Jackman added. “What we know now is huge. This ma just be the tip of the iceberg.”

That iceberg roots back to when SMPD detectives in his condominium at 520 Montana Avenue discovered Merman’s body on March 19, 2008. The Los Angeles Unified School District elementary school teacher was reportedly murdered after being stabbed several times.

During the ensuing police investigation, detectives looked into Merman’s finances and “located evidence of a conspiracy involving employees of AP Financial.”

The alleged “conspiracy” involved “an unrelated victim’s residence (that) was acquired by Becerril and his associates using fraudulent means” that was later “sold to a third party who later defaulted on the loan, resulting in the victim being evicted from her house and learning that her home had been stolen from her.”

According to the investigation, Becerril and his associates allegedly received the money from the third-party sale.

Becerril is currently being held without bail at the Santa Monica jail; according to SMPD, charges against Becerril include one murder count, six counts of grand theft, and “multiple counts of forgery and money laundering related to the approximately $700,000 in thefts.”

SMPD officials maintained the investigation is still not complete, as “arrests of additional codefendants are currently being made.”

It was also announced that based upon various interviews and evidence uncovered during the investigation, “losses related to Daniel Becerril and AP Financial could potentially be in the millions of dollars.”

Anyone who believes they have additional information on the matter may contact Det. HeeSeok Ahn SMPD’s Criminal Investigations Division at 310-458-8941. Anonymous tips may be left with the WeTip hotline at 1-800-78-CRIME (1-800-78-27463) or online at www.wetip.com.