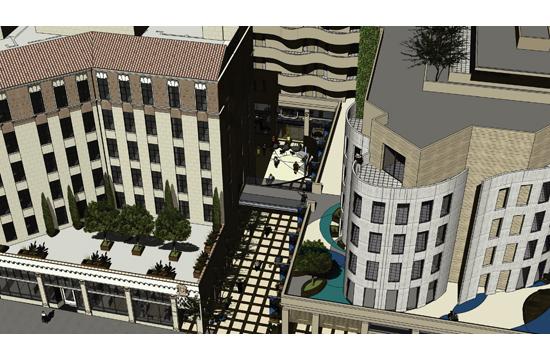 For all its life, 710 Wilshire Boulevard, “the Santa Monica Professional Building,” has housed small businesses and professional offices. Now it is the subject of public debate in the City. The owner, Alex Gorby of Maxser and Co. Ltd., is proposing the retention and adaptive reuse of the landmark building and the building of a 285-room hotel, with ground floor retail and restaurant uses, to be located on the existing parking lot immediately to the south of the Santa Monica Professional Building.

A Spanish Colonial Revival style building and a City Historic Landmark, the 710 Wilshire building is easily recognizable and well liked. It was designed by Los Angeles architect Arthur E. Harvey who also designed the Embassy Hotel Apartments on 3rd Street. In 1928, the year 710 Wilshire was built, at six stories and 40,638 square feet, it was the largest building in the neighborhood.

If developed under the current proposal, the old and new buildings will total approximately four times the size of the existing, approximately 40,000 square feet. A development of the size proposed would not be allowed under current zoning. In materials submitted to the City in 2010, Maxser and Co. stated: “The alternative of building a smaller 135-room hotel consistent with current zoning is not economically viable.”

A Development Agreement (DA) is a contract negotiated between the City and the developer. The City Council members are responsible for representing the interests of the City as they have the final say on the terms and conditions of the DA. The premise of a DA is that the benefits the City would achieve would justify the breaking of the City Zoning Code. Additionally, in a DA, deal points can be very broad.

In the case of 710 Wilshire, one deal point, the preservation of the Landmark Building, was not negotiable and is included. But there are other issues to be negotiated: the size, the height, the massing, the scale, the aesthetics of the proposed design, all are up for discussion. Parking, bicycles, transportation funding are on the table. Local hiring programs, student internships, and more – a list of conditions the City finds to be of sufficient importance and benefits to offset the additional benefits to the developer.

The City is addressing, but has yet to resolve, many of the issues listed above and the plan for review by a joint committee composed of members of the Landmarks Commission and the Architectural Review Board is a good idea.

Where the 710 Wilshire DA is weakest is on the terms of a living wage requirement. In fact, it’s downright off in its wage proposals and it includes a provision which gives the City Manager the authority to reduce the required wage standards, under certain conditions, instead of meeting of going through a public process at City Council.

I spoke with Elsa Mercado, who currently works at the Viceroy, and is a shop steward for the hotel union. Born in El Salvador, she lived in a beautiful area with mountains and rivers and was surrounded by her extended family. She and her many cousins were very close to each other and saw each other every day. She dreamed of becoming a nurse.

One day a man came to their house of one her cousins in El Salvador and asked for help changing a tire. After getting help with his tire, the man let them know he was an investigator for the government of the then- president of the country. Her cousin had organized against the president, as had Elsa Mercado. The man took her male cousin away for 15 days and no one knew where he was. Some agriculture students found him lying in a field where he had been badly beaten and they brought him home. Shortly after that, war broke out and their life was in danger. Finally, poverty, war and family problems made her decide to try for a better life in the United States. Elsa Mercado had dreams for herself and her three daughters.

For 13 years, Elsa Mercado lived in California without her daughters. At first she worked in factories where the wages were very low and the work very hard; places we would call sweatshops. When she got a chance to work at a hotel, she jumped at it. Of working at the Viceroy Hotel she said, “We have rights, we have a dignified wage, we have health care and other benefits, and we have the liberty of saying what is right and what is wrong.”

Elsa Mercado said, “I believe my plan is to continue to work at my job and also to work for the union in the defense of people who work. We are asking for a dignified wage of $15/hour and rights and respect from all the hotels that will be opening in Santa Monica.”

Setting livable wages and requiring reasonable benefits is allowable in a Development Agreement. Santa Monicans made it clear that they support the concept of a dignified wage, that it is important, during the time the City discussed and passed the Living Wage Ordinance.

I join in asking the City Council members to require that the Development Agreement for 710 Wilshire include requirements, for as long as the hotel is in business of, in Elsa Mercado’s words, “a dignified wage and rights and respect.”