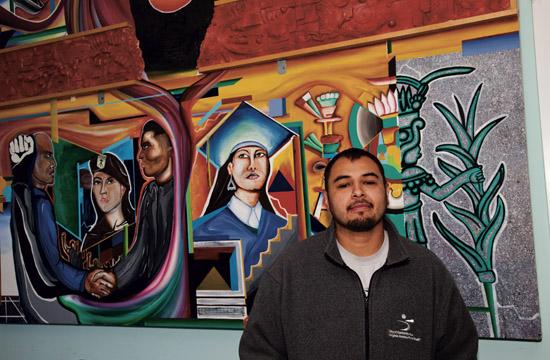 When Angel Villaseñor was growing up in the Pico Neighborhood, he always looked up to his older brothers who were involved in gangs when they were young. He remembers how he was infatuated with the gang-culture and the respect they received from their peers. But his older brothers never let him follow their path, which Villaseñor says saved his life.

At age 14, his brother two years older was among a crowd arrested in Santa Monica for a gang-related shooting. His brother was convicted as an adult and is currently serving a 28-year sentence in a prison outside of Bakersfield.

Now aged 28 and as the Pico Youth & Family Center’s sole case manager, Villaseñor recently reflected on how his life could have turned out differently.

“My brothers were involved in a gang when they were younger,” Villaseñor said. “You learn from their mistakes. Although they were going through what they were going through, they always made sure I wasn’t following their footsteps. They would always say ‘this is something you can’t do, we forbid it.’ I had resentment towards them when I was young because that’s what I wanted. Now as an adult I look back and I thank them for that, I think they saved my life.”

Villaseñor is the second youngest in his family of 10 who lived at Cloverfield and Virginia until he was in fifth grade when his father died. His mother moved the family into a house in Inglewood. His family returned to Santa Monica in the 1990s so he could attend John Adams Middle School and Santa Monica High School.

As a senior at Samohi, Villaseñor said he was approached by Oscar de la Torre in 1999 who was his outreach counselor at the time.

“There was a lot of gang activity happening in the streets, a lot of shootings and violence,” Villaseñor said. “Oscar approached me and my friends because we were influential within our crowds. He was like ‘hey, how would you guys feel to have a teen center, a place to go hangout after school with a studio and fun things and stuff like that?’ When he came at us with the idea he’s told us ‘I’m actually trying to start it.’”

Villaseñor helped with petitions and contributed ideas that helped with the center’s opening in 2002.

When the center opened, he said doors were opened for youth to be mentored just like he had been mentored when he was a teenager.

“I always remember mentors that believed in me when I didn’t believe in myself,” he said. “At JAMS I got into trouble and there was a vice principal and her name was Mrs. Everett. She was someone who was there for me. She went beyond the regular helping out. She really made you feel that you were someone especially growing up and not being exposed to resources like that or having people in your life that are really successful in terms of school.”

Everett introduced him to Liam Joyce who was a counselor at Santa Monica High School.

Villaseñor said Joyce was a mentor who always bent over backwards for him whenever he needed it.

“As a kid who wasn’t maybe the best student, you look back and really appreciate those people because they really helped you get through it,” he said. “Having those people in my life, I always knew that’s something that I would like to do and be that for someone else.”

Following high school, Villaseñor studied at Santa Monica College and Pierce College in Woodland Hills then on to the University of California, Santa Cruz where he graduated with a combined Sociology/Latin American and Latino Studies Degree. He has recently been accepted into grad school in Syracuse in New York where he will begin a Masters in Education program in the Fall.

Since joining the Pico Youth & Family Center last June as a case manager, he has been able to help guide those youth who are in danger of making bad decisions.

Many of these youth are on parole and have ties to gangs.

He said his own life experience allowed him to relate to what they’re going through.

“Growing up where you’re exposed to a certain lifestyle, it kind of influences you and the way you shape yourself,” he said. “At the time when I was young, I was infatuated with the gang lifestyle. I thought that it’s a way to be cool and a way to get respect. When you look at gangs and see what they do, they accept you. I think people overlook that mechanism within the gang structure. Gang members kind of figured out a way to show you love and embrace you unconditionally. There’s an infatuation kids get with gangs because it becomes your support system, like your family with a sense of belonging, even though it’s kind of false when you look back in hindsight. When you’re young, you feel like you belong. I don’t believe in gangbanging. I disagree for what they stand for which is hurting our own and doing all that. At the same time, the way they support one another when they show this love, that’s what keeps it going. Without that, there wouldn’t be any gangs.”

He said it was rewarding to mentor youth aged 16-24.

“Understanding all the mechanisms that go into what they’re going through really allows me to do the work that I do: inspire change and try to be that someone that I know these kids need,” he said. “Sometimes they don’t have those people at home or within the family, sometimes the situations they go through they just need someone to believe in them. I think the hardest part when you work with youth and you see the potential in them that they don’t see in themselves. That’s the challenge that I really want to bring that out, which is a process. You have to set goals and work towards those goals, but life happens in the process so it’s always challenging.”