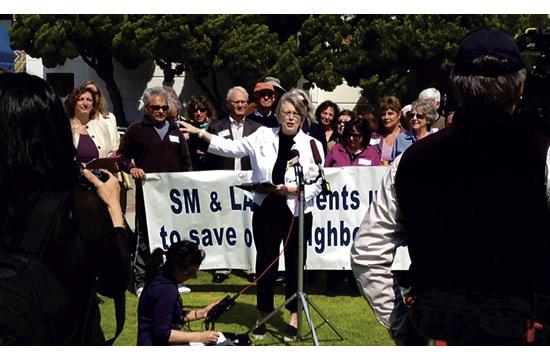 Opponents of the Bergamot Transit Village Center project held a press conference on Santa Monica City Hall’s lawn on Monday claiming the environmental impacts of the development would be worse than anticipated because the Draft Environmental Impact Report (DEIR) fails to factor in the collective impacts of the six other new projects surrounding the area.

The neighborhoods joining forces with Santa Monica residents to oppose the project include Brentwood, Pacific Palisades, West Los Angeles, Mar Vista, and Venice. Residents from these communities joined leaders of the Santa Monica Coalition for a Livable City (SMCLC) at the press conference.

Of key concern is that a master development plan is not in place to governing new projects in the southeastern portion of Santa Monica. In what has been labeled as “piecemeal city planning” by members of the SMCLC, the coalition hopes to prod City Hall to “work closely with other Westside communities to enact a comprehensive Master Plan for development.”

At the center of the debate is a DEIR that SMCLC say “reveals that many already gridlocked intersections will be negatively and significantly impacted by the massive Bergamot project; impacts the DEIR admits ‘can not be mitigated.’”

Simply put, opponents say the DEIR is not an accurate indicator of environmental impacts because it does not take into account future projects planned to be developed nearby the Bergamot Transit Village Center, with a reported six other projects either planned or already underway within a short distance.

As pointed out in an email by the SMCLC, the “cumulative effect of the Bergamot project and others winding their way through the planning process would add 24,000 new car trips every day to this already congested area, a third of them caused by Bergamot alone.”

“The effect of today’s traffic is that we are cut off from parts of West LA during certain parts of the day. Going north doesn’t really help. The impact of the current EIR would cut off Santa Monica. No one can get in, no one can get out,” Valerie Griffin of the Wilshire Montana Neighborhood Coalition (Wilmont), told The Mirror. “We cannot develop things in a vacuum.”

In a letter sent from the Wilmont board to City Hall’s Planning and Community Development as well as other staff members, Griffin outlined how certain intersections “from Venice and Walgrove to Montana and Barrington will experience ‘significant and unavoidable’ effects that will negatively impact traffic flow between Santa Monica and West Los Angeles.

“The proposed Bergamot Transit Village Center … will impact not only Wilmont, but neighborhoods throughout Santa Monica,” the letter by Griffin stated, further adding that there was a “fundamental inaccuracy” with the DEIR in terms of its calculations of jobs per square feet.

That “fundamental inaccuracy” results in a “gross understatement” of the traffic impacts, according to the letter. If the contention were proved accurate, traffic levels emanating from the Bergamot Transit Village Center may be worse than anticipated in the DEIR.

The SMCLC contends City Hall may be legally prohibited from moving forward with the Bergamot Transit Village Center project without developing a regional or area master plan.

“To approve this project without a regional or area plan is both city planning at its worst and a violation of the law,” the group authored email sent from members of the SMCLC to those it was informing of Monday afternoon’s press conference.

The SMCLC also retained the services of the law firm Strumwasser and Woocher; the firm filed a 26-page letter, detailing the coalition’s opposition to the Bergamot Village Transit Center, with the City Planning Dept. on the final day of public comment on the DEIR.

Among the claims included in the letter is that the DEIR did not adequately address mitigation measures as per the California Environmental Quality Act (CEQA).

“In spite of the City’s clear recognition that planning standards are necessary in order to guide the review of projects like the one proposed in the DEIR, the City is considering the approval of this project and several others without any such planning guidelines in place,” Strumwasser and Woocher attorney Beverly Palmer wrote in her letter to City Hall. “It is not acceptable under CEQA, nor is it sound policy, to continue the aggressive pace of reviewing new development proposals while simultaneously attempting to develop an important planning document that is designed to create a specifically-envisioned community in a limited geographic area.”

In other words, opponents of the Bergamot Transit Village Center project claim the environmental impacts of the development would be worse than anticipated.

“SMCLC has serious concerns regarding the size of the proposed project – which appears to be one of the largest in Santa Monica’s history – and its significant, negative impacts in an already gridlocked area,” Palmer wrote, adding the DEIR is “deficient in a number of critical ways.”

“The DEIR’s list of significant, unmitigable traffic impacts confirms that the proposed project at 26th and Olympic is simply too massive for the City’s existing infrastructure,” the letter continued. “The DEIR fails to adequately analyze the proposed project’s impacts on traffic, land use, hazardous waste, climate change, and cumulative impacts, among others.”

“The City of Los Angeles must protect its residents from project impacts and ensure that transportation infrastructure is not overburdened by the proposed project,” the approved motion and resolution read, adding that the mixed-use project, while located in Santa Monica, is about three-quarters of a mile west of the Santa Monica-Los Angeles border.

Plans of the Bergamot Transit Village Center development call for a campus of five mixed-use residential-commercial buildings, including as many as 325 residential units and about 500,000 of creative office space. There would also be dedicated open space and some ground-level retail, according to plans.

The Bergamot Transit Village Center, if developed, would be located adjacent to the Bergamot Station arts district and a planned Expo Light Rail station.