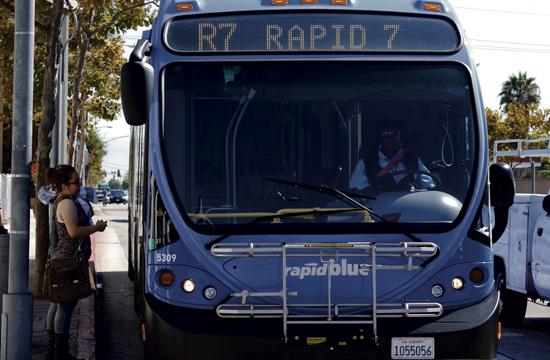 Three agenda items on the consent calendar carrying a combined budget of more than $6 million were altered by the Santa Monica City Council last week, with a water main replacement, bicycle parking services, and a new contract for unleaded gasoline highlighting the line-item expenditures.

With work on the Water Main Replacement Project already underway, council members approved a pair of alterations to the original construction and inspection contracts by $100,000 and $74,000, respectively. Accordingly, California-based Williams Pipeline Contractors, Inc., will provide additional construction services for the Water Main Replacement Project at Third Court from Broadway to Wilshire under a new contract worth $1,022,784.

Similarly, California-based SA Associates will receive another $74,000 to provide additional construction inspection services for the same project; its new contract is now worth $155,400.

Work on the Water Main Replacement at Third Court began on Sept. 6. City Hall informed council members in a staff report that “several unforeseen conditions were discovered, delaying the completion of the project and requiring an additional $100,000 in construction services and $74,000 in inspection services.”

The conditions included the “discovery of an unforeseen adjacent 36-inch reinforced concrete pipe storm drain” that was removed via a hand dig. There were also “numerous existing utilities” along Third Court from Arizona Avenue to Wilshire Boulevard that were “not shown on the plans and not marked by utility locating services.” One of the utilities was a shallow stretch of Time Warner fiber.

Finally, the existing water main crossing at Third Court and Arizona Avenue “had approximately 12 to 13 inches of cover which is considered substandard for water mains.” According to the staff report, water mains require at least 36 inches of cover. As a result, an additional 80 feet of pipe and a pair of new valves had to be installed.

The contract for SA Associates was nearly doubled in order for it to accommodate for the “increase in the days needed in the field to provide construction inspection services.” Under the original contract, which was valued at $81,400, an estimated 105 days was anticipated for inspection. However, as a result of the construction alterations associated with the Williams Pipeline Contractors project, SA Associates requires an additional 100 days to complete inspections.

Council members also altered a pair of contracts governing the construction of bicycle parking facilities at Parking Structures 7 and 8 on Feb. 28. The contract with California-based Icon West, Inc., was amended a fifth time, as the council approved an additional $117,666 for construction services of the bicycle parking facilities; with the change, the services contract is now worth $1,651,823.

California-based Civil Source had its contract with City Hall modified a fourth time, as its professional services agreement was increased by $22,110 “for additional construction management services” and resulting “in a new contract in the amount of $283,248.”

According to City Hall, the project “is funded by a Metro grant.”

City Hall also reported to council members in a staff report that the increased funding was necessary due to “new unforeseen conditions and new code requirements were discovered and required additional services to close out the project.”

Among the “new unforeseen conditions” included the relocation of an existing transformer in Structure 7 that was not up to code, the installation of more emergency exit signs, the “relocation of exterior signage to improve visibility to public,” a few revisions to power door openers, and the modification of bicycle racks “to provide tamper-proof locking arms,” among others.

Structure 7 is located at Santa Monica Place, while Structure 8 is on the corner of Second Street and Colorado Avenue.

Council members, allowing City Hall “to continue purchasing premium and regular unleaded gasoline as required by the Fleet Management Division, Fire Department, and Big Blue Bus”, extended a series of purchase orders with SC Fuels two months. The extension is worth about $115,550, while the total contract is now valued at $3,564,938, according to a staff report.

Staff suggested the two-month extension to “allow for a competitive bid process specific to the City of Santa Monica to be completed.”

The original contract was approved in Feb. 2007, when City Hall “participated in a cooperative bid conducted and led by the Los Angeles County Metropolitan Transportation Authority (LACMTA), along with Montebello Bus Line for the solicitation to supply and deliver premium gasoline.”

With the extension, City Hall hopes to continue fueling emergency response vehicles while allowing “staff enough time to complete the bidding process to ensure that the City receives the best price and service.”

“For future gasoline purchases, a recommendation for fuel purchasing will be presented to Council in April 2012,” the staff report stated.