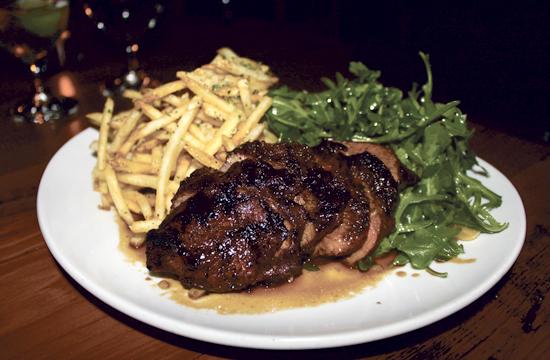 Main Street has a new addition in the restaurant business in the form of Brick + Mortar, tucked away next to the Edgemar Center for the Arts.

The casual yet elegantly renovated restaurant is courtesy of the Brosephs Restaurant Group, which is headed by Travis Lester and Justin Safier.

The pair said they had been looking at the space for almost a year and snapped up the opportunity when Saluté decided to finally throw in the towel.

Lester said the former lounge-style wine bar with low tables and couches had all been replaced with new, modern furniture in the form of high-tops and booths.

“We wanted to bring in more of a food-friendly restaurant to the neighborhood, but we didn’t want to be super pretentious and outlandish with high-end fine dining,” Lester said. “We’re very casual individuals because our restaurant group is built around casual elegance, especially on the Westside. You have million dollar men who wear flip flops and board shorts and we understand that. They still like to get a good steak, watch the game, and hang out.”

Heading up the kitchen is French-trained Chef Laurent Saussy who only uses the finest and freshest ingredients.

Saussy doesn’t even like the idea of using a freezer, so it was removed as part of the renovations to make way for a walk-in cooler for an expanded line of beer kegs for the bar.

“We’re becoming a lot more craft beer orientated,” Lester said. “We also like to have the staples on draft like Bud Light for the non-craft beer drinkers because we want to give a little bit of something to everybody. We also have 100 wines on our list, 12 specialty cocktails, over 200 liquors in the house as well as our 24 beers on tap.”

None of the cocktails contain artificial flavors or anything out of the can for that matter. All of the juices are fresh-squeezed daily and everything is seasonal.

Safier said its wine list focused on many small wineries that produce bottles that can’t be found on the shelves of mainstream grocery stores.

“We’re still very value orientated because we want to pass that onto our customers,” Safier said. “We try to find good deals that you can’t find at multiple locations. That’s what kind of separates us. We try to find what the neighborhood likes.”

The menu is essentially contemporary-American with a selection of fresh pastas, burgers, seafood, and steak.

Brick + Mortar inherited a high-end pizza oven imported from Italy that was formerly used by Saluté. Lester said it was used to cook thin crust crispy pizzas with a twist.

“It’s one of our best assets because it enables someone to come in and just start off with a pizza, which we can get out in five to seven minutes,” he said.

“They are really thin crispy pizzas, so it’s more of a compliment to a meal, not a sole meal. We have braised short rib pizza, we have spicy Italian sausage which is made in house, we do a truffle and mushroom pizza, we do a margarita pizza with fresh buffalo mozzarella. It’s not your typical pepperoni or mushroom type of pizzas, it’s more of a decadent pizza that everyone can relate to, but is just done in a fancier way.”

The entrees are exceptional value with generous servings at a reasonable price – a trait Lester said was their main goal to encourage guests to return and spread the word to friends.

“We always say, you can spend $9 on a steak, but if it’s the worst steak you’ve ever had, it’s the worst $9 that you’ve ever spent,” Lester said. “Our goal is to not be the restaurant group where you send people out stuffed and rolled out in a wheelchair, but on the same token, we want them to come in and say ‘wow that steak with parmesan fries for $22 was one of the best meals I’ve had for that value.’”

The menus are printed on paper as the dishes are constantly evolving.

Lester said the menu reflected what Chef Saussy was able to source for the best value along with the best quality.

“Our goal is for the next time you come in, you don’t have the same thing that you had before,” he said. “It’s a very small, concise menu. We’re not from the likes of the Cheesecake Factory as there’s no way you can do 150 things well. We would rather do 15 things great. We always want to change, so no matter when you come in you can get something new, but you have your old staple and that you know that the quality will always be there.”

And as for the name? The pair said they had seen a lot of restaurants come and go in Santa Monica, which is why they wanted to play off the idea that with brick and mortar on its walls, it was their way of saying they had an intention of staying in the neighborhood for a long time.

Brick + Mortar is currently open 4 p.m. to late Monday through Friday, but weekday lunches will start at 10 a.m. on April 1. It is open 10 a.m. to late on Saturdays and Sundays.