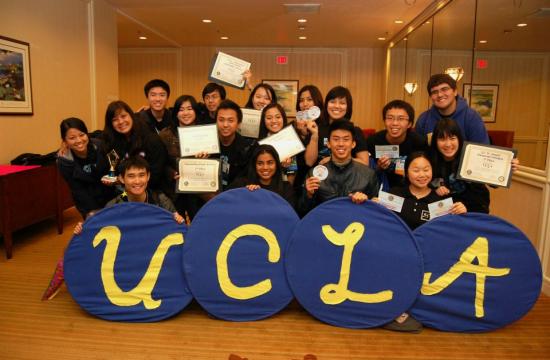 UCLA’s chapter of Circle K International (CKI) spent this past weekend at the 58th annual California-Nevada-Hawaii (Cal-Nev-Ha) CKI District Convention, where the club was recognized for a variety of outstanding achievements.

UCLA was deemed a Distinguished Club and received Honorable Mention for Total Club Achievement in the Gold Division (61 or more members).

UCLA received several awards for its accomplishments over the past administrative year. Aside from being presented the Distinguished Club and Honorable Mention for Total Club Achievement, UCLA was awarded first place in Diamond Division for the Growth Enhances Membership Award and first place Outstanding Interclub due to the club’s interactions with other branches of the Kiwanis Family.

Pillow Fight 2012 raised more than $3000 for Alexandria House, a local transitional residence for single women and women with children.

“This past year has been a great year with many achievements for the Circle K at UCLA,” said Limjoco. “It is due to the wonderful officers and members of the club that more than 8000 service hours were performed and more than $2600 was raised for organizations such as Pediatric Trauma Program, Not for Sale, and Project Eliminate. Members served the community by participating in events such as Reading to Kids, tutoring at Playa Del Rey Elementary school, helping feed the residents of Alexandria House, campus and beach clean ups and much more! Members also took part in bake nights, food fundraisers, and TV Tapings, to help fundraise for various causes.”

Circle K International embodies the values of leadership, fellowship, and service and has grown to be the largest collegiate service organization in the world.

With more than 12,500 members in 17 countries, more than 1 million hours of service are performed each year. Chartered in 1974, UCLA’s Circle K falls into the California-Nevada-Hawaii district of the organization, where over 2100 members serve the community and raise funds for charities.

Circle K at UCLA remains dedicated to its mission to change and better its community one member at a time.