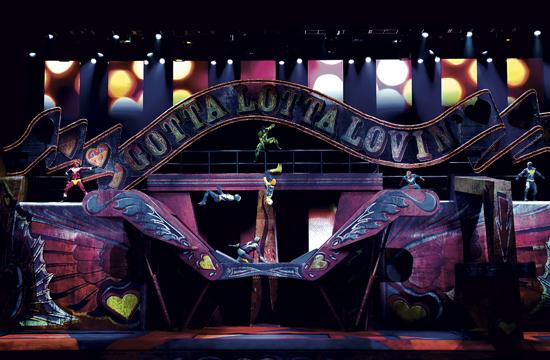 The King of Rock ‘n’ Roll lives on – until the end of the year at least – in Cirque du Soleil’s “Viva Elvis” tribute show inside Aria resort at CityCenter on the Las Vegas Strip.

Although “Viva Elvis” is the newest of the seven Cirque du Soleil shows along the Strip, the show is now in its final season due to poor ticket sales.

The show highlights the music of an American icon who changed rock and roll forever.

By creating a reinterpretation of the music of Elvis Presley, Cirque du Soleil set out to present the songs of the King of Rock ‘n’ Roll in a contemporary form that evokes the spirit of Elvis in every way.

The styles of “Viva Elvis” move from Delta blues to rockabilly, soul to gospel, through Dixie and Southern folk music.

But one thing is certain and remains consistent: the sound is pure rock.

Like Cirque du Soleil’s other Las Vegas resident tribute show “The Beatles LOVE,” one of the biggest challenges was to establish a balance in the selection of songs. The creators set out to include enough of Elvis’ hits, but not be a simple “best-of” play list.

Some of the songs were chosen to fit the narrative of the show, but above all it was Presley’s boundless energy and his disarming charisma that dictated Musical Director and Arranger Erich van Tourneau’s song choices.

The sets are as extravagant as any other Cirque show.

For the “Got A Lot of Livin’ To Do” act, the set features seven trampolines and the whole structure was inspired by Elvis’ love of fairgrounds, which he would visit with his friends after hours. The structure weights some 30 tons and takes up the full 78-foot width of the stage, is 23 feet deep and 32 feet tall.

The challenge for the Jailhouse Rock set was to reference the iconic set used in the film, but at the same time be original and fresh. It was based on the technical requirements for a circus art called “marche inversee.” The structure incorporates 10 tracks for acrobats to walk upside down, attached by their feet, while dancers perform right-side up on other levels.

The show, which runs for about 90-minutes with about 20 acts, finishes with a Viva Las Vegas set that captures the glamor of Las Vegas with a huge ceremonial staircase as its central feature. Pavilions on the sides house the musicians, and decks above the pavilions serve as stages for the dancers, jugglers, and other circus artists.

To complete the glamor and provide the show with a climax, there are two gold-leaf sculptures of Elvis in iconic poses from the peak of his popularity in Vegas.

The “live singers” in Viva Elvis are all female; the only male voice is that of Elvis himself – on the grounds that only Elvis could possibly do justice to Elvis when it came to portraying his vitality and deductive charm.

Isolating his on the original recordings was a major technical challenge because his voice and the instruments were almost always recorded on the same tracks.

For any Elvis fan, this show does the King proud when it comes to being a celebration of his voice, his movements, and his provocative image as the herald of adolescent rebellion in the 1950s and 1960s.