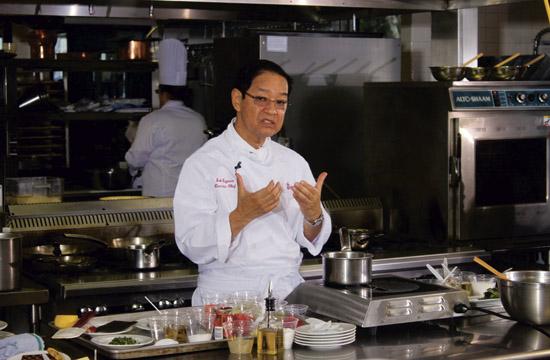 The Consulate General of Japan in Los Angeles held a culinary celebration hosted by The International Culinary School at The Art Institute of California – Los Angeles in Santa Monica last Monday afternoon.

The event, “Deeper Into Japanese Ingredients – Tastes Beyond the Familiar,” was held in the Bistro 31 dining room for Art Institute students eager to explore culture through cuisine and increase their understanding of global foods.

Chef Katsuo (Suki) Sugiura (Circa 55 at the Beverly Hilton hotel) and Chef Troy N. Thompson (Asia de Cuba at the Mondrian hotel) spoke about how they integrate Japanese ingredients into their overall craft as part of the afternoon’s event.

Chef Sugiura said his message for students was that there was more to food just being about great taste and presentation.

“It’s also about the health benefits for their guests,” Sugiura said. “We have to be responsible to be healthy and of course be tasty with good presentation. What we’re showing is how to use foods that have no preservatives like Japanese ingredients in the United States and how we convert local ingredients for American tastes.”

The menu and recipes were provided during a reception for participants to taste following the afternoon of demonstrations and Q&A sessions.

There was also a knife-sharpening and soba making demonstrations, as well as Japanese sake tastings.

Chef Thompson said he was pleased to see the students taste and experience the various Japanese ingredients.

“Chef Suki has a very European way of doing it,” Thompson said. “He said today more than anything that I’m more Japanese than he is. I’m the total opposite of him. I use the ingredients and I try to keep it in the Japanese text of it. I really relate to where the product is from, I taste it, and then I figure out how to cook it or not cook it. I’m really hoping they aren’t afraid of the ingredients.”

These are some of the ingredients the students were exposed to.

• Hokke: A type of fish (a species of greenling) served in numerous dishes in Japan.

• Iriko/Konbu Dashi: Iriko or Konbu Dashi (DAH-shee) are very common Japanese soup stock. The broth is made out of Iriko (dried sardine) and or Konbu (dried kelp).

• Kouya Dofu: Freeze Dried Tofu. Since all moisture has been extracted from this tofu, it functions like a sponge and soaks up more flavor than regular tofu.

• Sakekasu: Lees left over from sake production. It can be used as a pickling agent, a cooking paste to add flavor to food and as a marinade.

• Sendai Miso: Red miso made in the Sendai Region. Red miso is generally aged for more than one year. The aging process and the formula of the soybeans and quantity of the soybeans used caused the color of the miso to change to red-ish black. It has a stronger taste than other miso.