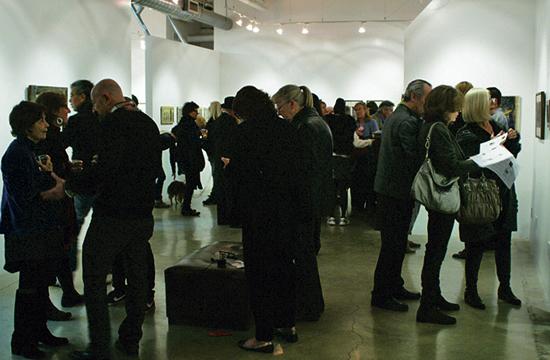 Noirist and long-time Santa Monica resident Helen K. Garber has been having a great time with her “dream project” – NoirFest Santa Monica.

The three-month long festival ends with a closing party at Hotel Casa del Mar this Wednesday, March 28 from 7 p.m. to 10 p.m.

Garber, a multi-media artist and founder of the festival, has lived in Santa Monica with her husband Dr. Stuart H. Garber for the past 30 years.

She said she loved everything Noir.

“I started specializing in photographing night urban landscapes in 1997 and began to integrate other media starting in 2002,” Garber said.

When asked how she thought the festival went, Garber smiled and said it was a success.

“I am totally jazzed to see how the CA Noirists came together to create such amazing programming,” she said. “The intelligence, passion, and creativity of these artists are quite amazing, we have really enjoyed the collaboration.”

She said all the venues produced their own events.

“The library chose Raymond Chandler as their author for the 10th Anniversary Santa Monica Library City-Wide Reads which was an unexpected and a delightful coincidence,” she said. “It expanded the programming to include far more than the core festival that I was able to coordinate myself. Robert Graves designed brilliant programming – he even seduced Michael Connelly to join in the fun. And a most special thank you to author Judith Freeman, who dazzled us with her great enthusiasm ability and talent. She is the anchor to any programming celebrating Raymond Chandler.”

Various venues cross-promoted the events and along with local newspapers and the Santa Monica Cultural Affairs that helped attract large crowds to many of the events.

Garber recounted the enthusiastic response to the festival.

“It was a big opening night at my exhibit as well as the artist’s talk,” she said. “There was a large group at the after party and over 200 people at the Aero Theatre for a 65 year old double feature, full houses for the various author’s events.”

Garber said the Casa del Noir closing party at Hotel Casa Del Mar on March 28 would end the festival on a high note.

“Barbara Morrison and special guests will be performing and admission is free,” she said. “There will a wonderful evening of great noir-inspired music with proceeds from drink, wine, and appetizer specials will benefit two important local Jazz organizations – KJAZZ, the only Los Angeles based jazz radio station and Barbara Morrison’s Performing Arts Center in Leimert Park, Los Angeles.”

When asked if NoirFest was all that she expected, Garber laughed and replied, “What I hoped for, absolutely… even more. Thank you everyone.”

Hotel Casa del Mar is located at 1910 Ocean Way, Santa Monica. The event will feature a cash bar and vintage attire is suggested.