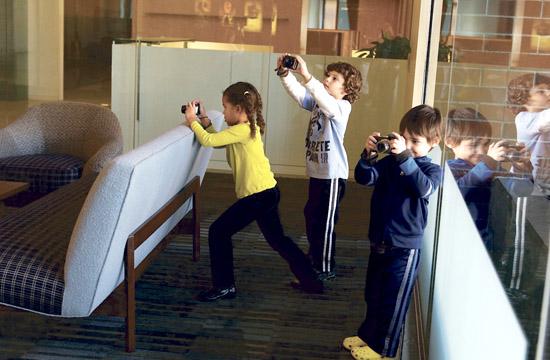 Apparently “it takes a village to raise a child,” and one local preschool is working really hard to establish such a village in Santa Monica. What is more, a handful of children from that preschool went so far as to act as “spies” to develop a village in the most unlikeliest of places: Lionsgate’s headquarters.

Operating under clandestine guise of being a “spy,” at least four children from Evergreen Community School on Colorado Avenue participated in a multimedia exhibit aimed at establishing a strong sense of community amongst them and their neighbors. Located directly adjacent to Lionsgate, the exhibition – prominently displayed in the Lionsgate lobby – aimed at connecting Evergreen’s 60 children with 1,000 adults employed at the entertainment company.

The multimedia exhibit was entitled “FYI, I am a Spy” and “documents the work of a small group of children who, through a series of interactions with their neighbors, merge their world with the adult world as the two groups come to understand and alter their perceptions and misconceptions of the other.”

While the project has been in works for years, Alise Shafer of Evergreen said it finally came to fruition when the children went to Lionsgate on an errand to obtain new supplies to rehabilitate the school’s “Paper Room,” which was a room literally built of paper.

To their surprise, when the children asked to see the Lionsgate “Paper Room,” they discovered it was a copy room full of supplies.

The discovery set the Evergreen children on a path to pose as spies in attempt to get to know their neighbors better. Their enabling mission: obtain the names of 1,000 people working inside the Lionsgate building.

“We started off getting paper, but when we were getting the paper, we noticed a lot of interesting things were happening, and we wanted to find out. That’s how we became spies,” Zachary, one of the Evergreen children, told The Mirror. The other three children were Lucinda, Free, and Rowan.

Along the way, the little munchkins connected with one “Kyle,” who advertises himself as a “spy” from another agency. Kyle ultimately suggested the children pose as a cleaning crew and, in their cover, he would help the Evergreen spies “infiltrate” Lionsgate and help them get names.

As of Feb. 29, the core participants obtained 31 names. Both Evergreen and Lionsgate have been collaborating on this multimedia exhibition and community-building exercise for nearly three weeks now.

The application even had a caveat that read “don’t worry about leaving your phone number, we’re spies and we can find you.”

The fun and games were part of a bigger vision that aimed to provide the children with a sense of community and belonging.

“When we began our journey with a small group of children, we had no idea where it would lead. What started out as a simple paper collecting errand has evolved into an exploration of human connection,” Shafer read from the narration posted along the back wall of the Lionsgate lobby.

As Shafer put it, many times adults unintentionally forget to pay enough attention to children or do not realize how much attention they need. Accordingly, children oftentimes find themselves in situations that do not foster communal growth.

“Children have a certain status in their community and it’s a pretty invisible status,” Shafer said. “Several years ago, we started thinking about how to make children more visible. In cultures or societies where children are visible, they ultimately have better education, better health care.”

Indeed, part of “FYI, I am a Spy” intended to increase the visibility of at least a handful of children by having them playfully interact with their corporate neighbors.

“We thought, there’s this building next door with 1,000 adults here that are pretty much unaware of our presence,” Shafer heartwarmingly told The Mirror. “We started thinking about how we could have the children more visible. This is really about the status of children.”

While the children’s quest to connect with their neighbors may continue on, the multimedia exhibition is nearing its end.

The public will not be able to view the walk-in paper experience nor the installed banners after the close of business on Monday.

As the exhibition cannot be viewed this weekend, the public’s last chance to view it will be between 9 a.m. and 6 p.m. on March 5. Lionsgate is located at 2700 Colorado Avenue.