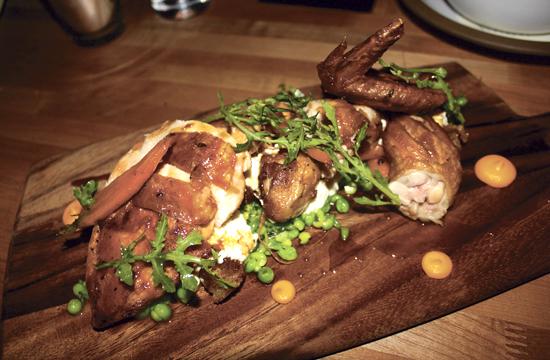 If you have ever wondered what’s really in your glass when you’re out a bar, now there’s a place where you can find out: Freddy Smalls: Bar + Kitchen, which has introduced informal monthly beer, tequila, and whiskey tasting, education, and pairing classes.

General manager David Fleisher said its monthly “Night School with Mr. Smalls” classes have continued to increase in popularity since they opened its doors.

“We try and keep it fairly casual, but with the trends in food and drink in the past few years, people are interested in getting information and learning about the different whiskeys, spirits, or beers they might be trying.”

Tasting sized portions are available for purchase and bar-goers are encouraged to order as many or as few different selections as they like while learning about what they are drinking.

Freddy Smalls is a project of Jeff Weinstein, the founder of The Counter on Ocean Park Boulevard in 2004, which was the first burger joint in what has now expanded into a nationwide chain.

Weinstein completely stripped the former restaurant space at 11520 Pico, which was formerly occupied by El Sarape.

“We wanted to do a step-up from the average kind of dive bar, but wasn’t something that was going over the top mixology-based in regards to the concept,” he said. “We wanted to have a great list of beers, which we definitely have. We have a nice selection of wines and then we wanted a cocktail program that was based around really quality spirits and cocktails that were executed very simply. They are informed by the mixology trends of the last four to five years in Los Angeles, but aren’t overly done in the sense that they were covering up or hiding the liquors that are in the cocktails, but actually expressing them and playing them up in a simple, but refreshing manner.”

Heading up the kitchen is executive chef Charlie Parker who hails from Northern California. Parker’s most recent culinary position was at Plum restaurant in Oakland, but he has also spent time at Manresa and other top restaurants in San Francisco and the Napa Valley.

Fleisher said the goal of Freddy Smalls was to create dishes that weren’t esoteric and overly done.

“We wanted it to be familiar flavors and things that were accessible to people, but done with that skill in making something particularly special,” he said.

One example is the slow-roasted chicken dish paired with a Panzanella salad with peas and ricotta, which is an uncommon pairing, but works.

One of the more signature dishes is the Reuben’s Gluttony, which features house-corned beef with bone marrow, Yorkshire pudding, and caramelized kraut.

The Brussels Sprouts on the “snacks” menu is creating a buzz among bar-goers. They are deep fried in rice bran oil with the resulting caramelization changing the flavor and texture to make it a desirable dish. With the combination of smoked goat cheese and an apple cider glaze, these Brussels Sprouts are definitely becoming a hit at the bar.

The charcuteries are all house-made and constantly changing, as is the line-up of cheeses and Pâtés.

Fleisher said many of its dishes can’t be found anywhere else.

“Our steamed Manila clams seem to be a dish that I don’t find commonly on most menus around town,” he said. “We do our clams with vadouvan spices. Vadouvan is Caribbean-style that goes really well with clams.”

He said another individual item was its deviled eggs.

“Our Buffalo deviled eggs combine flavors of Buffalo wings, Buffalo hot sauce, and blue cheese that’s put into a deviled egg with crispy chicken skin. It’s a really fun, playful dish that has a lot of great flavors. I think of it is something that’s exceptional and unique to Freddy Smalls.”