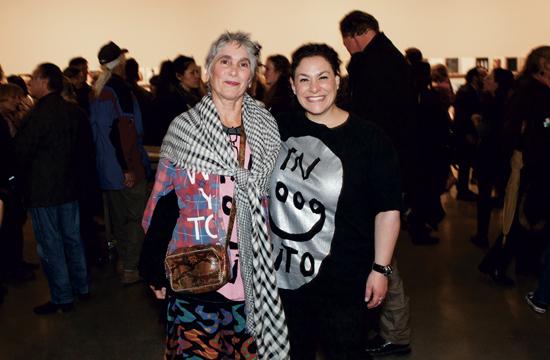 At the strike of 7 p.m. on Saturday night, more than 600 art enthusiasts stormed the Santa Monica Museum of Art’s main gallery in less than 12 minutes to snap up their favorite 8” x 10” artworks as part of the museum’s annual art exhibition and benefit sale, Incognito.

This year saw an extraordinary level of participation from iconic and emerging artists in Los Angeles and around the globe. About 500 artists donated at least one work and all were sold for $350 each.

“What I liked most this year was that despite the deluge, everyone was in wonderful spirits and seemed to find art that they love,” Longhauser said. “The event was very successful – our best ever. We had a record number of works – 700 – and we have fewer than 100 left. We keep the remaining pieces.”

She said she personally bought an artwork at the end of Sunday when everyone had left following the second opportunity sale from 11 a.m. to 2 p.m.

“I love the fact that even after everyone was gone, there was something left that is quite wonderful,” she said.

James Gray’s D5 building next to the museum housed the VIP Lounge as part of the event.

Gray said he was thrilled to be involved with Incognito.

“Due to the weather conditions, the Santa Monica Museum of Art asked if they could use my space for the party,” Gray said. “I was hesitant at first because I did not know if the gallery would be ready for the public because I only took over the D5 building on March 1.”

Luckily everything came together in the last few days and the party went ahead with success in the D5 building and Gray’s existing D4 building.

“I have always been an admirer of his work,” he said. “It was also great to see first hand the patrons so enthusiastic about Incognito.”

This year was the eighth year SMMoA has hosted Incognito.