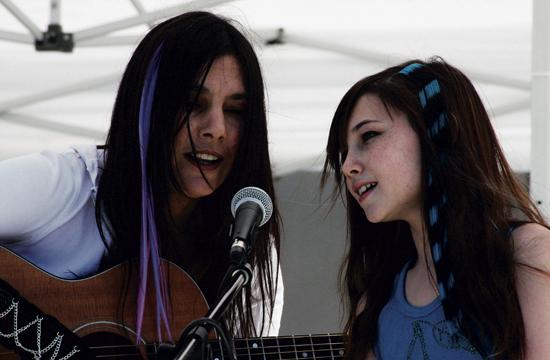 She may only be turning 13 years old next month, but Jacqueline Mackenzie already has a singing career that spans five years with her first album in the works and a benefit concert at The Talking Stick Coffee Lounge this Sunday, March 25.

Her performance will be from 4 p.m. to 5 p.m. to benefit the John Adams Middle School Science Magnet Scholarship Fund.

The seventh grade JAMS student said she wrote her first song “I Don’t Really Care” when she was eight with her best friend, Sophia.

Two years later, after about six months of lessons and another song “Hold On,” her guitar teacher Todd Washington told her he would take her to the upcoming Paramore concert if she could write five songs in five months.

“It was April and the concert was in September,” Mackenzie said. “That June, Leila Steinberg offered me a scholarship into her Mic Sessions Kidz classes and she gave us weekly topics, so three out of the five of my ‘challenge’ songs came from there.”

The other two songs she completed in her own time, which meant she was able to go to the concert that further grew her love for singing and songwriting.

Although she doesn’t attend Mic Sessions anymore, she has been writing and performing ever since.

“My songs are about everything from abuse to not telling lies to bridging communities and working together, to how silly parents are sometimes,” she said. “I think the message I send is usually a socially responsible one and one that many can relate to, both young, old, and somewhere in the middle. I think it’s important not to sing about getting drunk like in the song ‘The Hangover’ by Taio Cruz or looking sexy like every Rhianna or Katy Perry song. It may sell but, it’s dumb, but I have to admit that I listen to it all.”

So far Mackenize has self-produced all of her material at home on her laptop with her mom Liane Curtis.

They record of the music at Media Kitchen in Gardena with their engineer, Rob Black.

Mackenzie said she loved to sing because it made her feel good.

“It’s one of the ways I enjoy expressing and de-stressing myself,” she said. “I like to hum to myself as well as sing to my 40 birds, a human audience, or a mic in a booth – it all makes me happy. As far as songwriting, it’s a great way to reach a lot of people at the same time and I like it in this case because it’s a tool I have which I can use to give back.”

At the Talking Stick Coffee Lounge on Sunday, she will perform 10 original songs and two covers – “Under the Milky Way” by The Church and “Luka” by Suzanne Vega.

She said giving back to the community was important to her.

“Without community, we would be living in a common place, but not interacting or ever working toward a common goal, or helping one another on a daily basis,” she said. “I feel lucky to be in Santa Monica and privileged to be in SMMUSD (Santa Monica-Malibu Unified School District). I think that Santa Monica is a tight-knit community, not that I have experienced a lot of different places, but I can tell by how it feels that it makes me want to contribute to keep that feeling alive.”

“Each year our Magnet program takes 7th grade students to Yosemite for a week and 8th graders to Astrocamp for an extended weekend,” Post said. “Many of our students are unable to afford the trips and so we provide scholarships so that no student is ever excluded from one of our Magnet activities because they can’t afford it.”

Mackenzie said she would be recording her first single at Spin Move Records in about a month. She has also been invited to perform at Nola’s LA Jazz Club for the upcoming ISIS Invitational one-year anniversary celebration.

Sunday’s show is free, but donations and purchases of food and drink are encouraged as proceeds will benefit the JAMS Science Magnet scholarship.