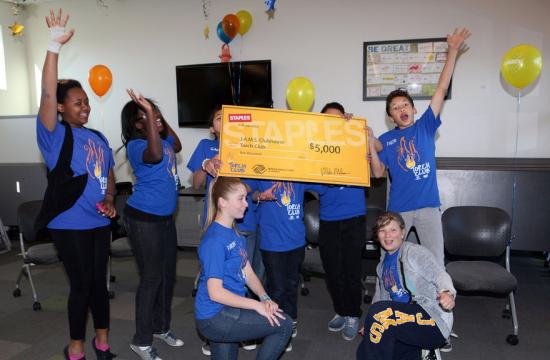 Pre-teen members of the Boys & Girls Club of Santa Monica J.A.M.S. Branch were recognized for their leadership and service to the community with a national award from Boys & Girls Clubs of America (BGCA) and Staples Foundation on Wednesday, the private charitable arm of Staples, Inc.

The Torch Club Award went to members of the branch’s Torch Club, which is a program for youth ages 11 to 13 within Boys & Girls Clubs designed to build character and leadership skills. The J.A.M.S. Clubhouse Torch Club was selected out of more than 1,600 Clubs globally to receive the award and is being recognized alongside four other clubs from around the world.

At the event, local Staples representatives presented a $5,000 check to the Torch Club in recognition for the positive impact they’ve made in the community through a variety of service projects, including:

– Participating in Heal the Bay, a project to learn about taking care of the environment and how actions affect the world around us

Additionally, Staples Foundation awarded an all-expenses-paid trip for two Club members and an advisor to participate in a BGCA youth leadership conference in Fort Worth, Texas, March 22-24.

During the conference, the Torch Club will also be recognized at an awards ceremony, and the youth will take part in a community service project and visit Six Flags to celebrate their hard work.