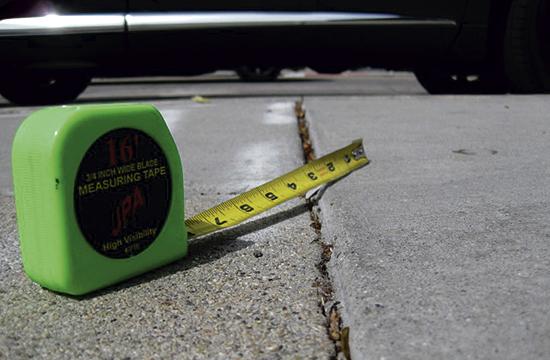 A Montana Avenue business owner says the City of Santa Monica has been carrying out unnecessary sidewalk replacement with construction workers assigned to the job laughing at how unnecessary the work is.

At first he thought it was a joke as he said there was nothing wrong with the pavement, but he said it wasn’t a laughing matter when a construction crew arrived a few days later.

As the construction crew started to mark up the six pavement squares to be removed with spray paint, Afsar snapped photographs to show the mere quarter-inch gap between two of the paving blocks.

“When the construction guys came in, I said ‘do you really want to take remove them because nothing is wrong with them,’” Afsar said. “The construction guy said ‘I know man, they just told us what to do and I’m just following the instructions.’ I said they could shave a quarter of an inch off opposed to removing all the blocks, but he said that wasn’t his orders. I’ve been here five years and no-one has tripped or fallen from it.”

He said the contracted construction workers even joked about the situation to him saying, “I guess they wanted to create jobs.”

“When I think about it, it just makes me mad,” Afsar said. “This is a problem for our business. No-one could park in front of our store for more than a week. With their cutting machine they used to cut the blocks, it splashed all over our windows and they didn’t even say sorry or clean it off.”

The Mirror contacted Martin Pastucha, City of Santa Monica Public Works Director, and asked what he thought about Musti’s claim that the work was unnecessary and a waste of taxpayer money.

Pastucha said the contracted work was a matter of proactive maintenance and repair of “valuable street and sidewalk assets was necessary in order to maintain a safe environment for the public.”

“A systematic approach to maintaining and repairing these assets in a cost effective manner is essential,” Pastucha said. “If maintenance is deferred, the life-cycle cost of maintaining infrastructure can grow significantly.”

Pastucha said the City of Santa Monica’s Street Maintenance Division conducts sidewalk inspections of the sidewalk areas in the public right of way adjacent to schools, hospitals, and commercial areas on an annual basis and the remainder of the City’s sidewalks are inspected on a tri-annual basis (approximately one-third of the City’s total sidewalk area is inspected each year).

As part of the annual project, Pastucha said if other areas were likely to warrant repairs in the near future, for various reasons including the displacement caused by tree root growth as was the case at 1119 Montana, those sidewalk areas within the project limits would also be addressed as part of the contract.

“These areas are identified by a construction inspector,” he said. “When sidewalk and street maintenance repairs are completed simultaneously as part of one larger project, construction impacts to the neighborhood are minimized and the City has the added benefit of economy due to the scale of the project.  For instance, the cost of repairing the location at 1119 Montana Avenue within a larger contract is about $300 given its approximate area of 50 square-feet. Deferring maintenance and having to repair the same location individually at a later date would be much more expensive without the economy of scale.”

The cost of sidewalk repair by the current Annual Paving and Sidewalk Repair contract is $6 per square foot, which is a very competitive price for this type of repair work, Pastucha said.

“The total cost of sidewalk repair as a part of the current construction contract is $420,000,” Pastucha said. “The total amount of sidewalk scheduled to be repaired is 70,000 square feet. The city has made a concerted effort to maintain pavements conditions at a high level and will continue to make investment in the infrastructure in order to maintain current city street and sidewalk assets in similar conditions. The annual investment will vary based on conditions assessments and needs, but investment will be in around $2 million per year.”