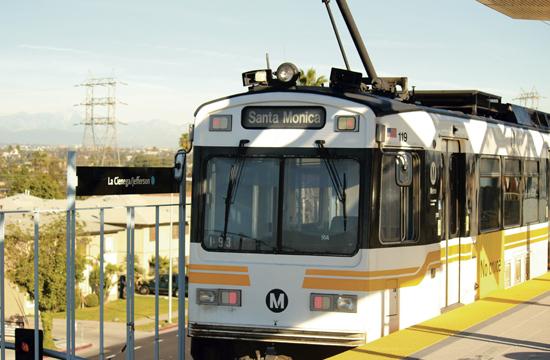 The final phase of testing for the Expo Light Rail Line Phase 1 is now underway with trains set to begin operating out of the La Cienega/Jefferson station come mid-April.

The Venice/Robertson Station will open six to eight weeks after the opening of the La Cienega/Jefferson Station, which will provide commuters from downtown Los Angeles their first chance to reach Culver City and the outer rim of the Westside via light rail, according to Eric Olsen, Chief Project Officer of the Expo Authority.

Olsen said safety protocols were the reason for the delay of the opening of Phase 1 of the Expo Line. It was initially scheduled to open in January and then March of 2012.

“We just put in a high tech automatic signal protection system,” Olsen said. “It is an added safety measure and will override an operator if an operator misses a signal.”

The new auto stop technology is being applied to vehicles that are more than 20 years old and the task, now completed, has been passed onto the Metro authority to operate test runs on the system to make sure it is ready for commuter travel to and from Culver City.

Phase 2 of the Expo Line, which is currently under construction, is expected to start operating all the way to downtown Santa Monica in 2015.

Phase 2 will link the Expo Line from Culver City to the Santa Monica terminus at 4th and Colorado, which is a block away from the Third Street Promenade.

The Expo Line from Culver City to Santa Monica had initially been scheduled to open in 2014, but has been pushed back until 2015.

City officials believe that this project will be worth the wait.

“Without Expo Light Rail there is a major missing link to the regional transportation system,” Vernez said. “It will be the first mass transit system created. It will be of very substantial benefit to both the environment and the city.”

Commuters who drive their cars through the city of Los Angeles to reach Santa Monica and Los Angeles during rush hour frequently experience a daily ‘carmageddon’ en route to their jobs with traffic along the 10 Freeway.

Santa Monica Mayor Richard Bloom said the Expo Line would provide for a better experience for residents in the business community as well as benefit tourism.

“One thing we don’t think about is the freeway system,” Bloom said. “The 10 (Freeway) has effectively removed us from various communities and Expo is going to help bring these communities back together.”

The City of Santa Monica has been working to implement the Expo Light Rail Line since the late 1980s and preliminary construction of the line has already begun with the recent demolition of old buildings such as Sears Auto Center and the bank training facility on Colorado and 24th.

“It takes decades of concerted effort by people in the City Council who really worked hard to get this type of rail system opened and we are thrilled that it is within reach,” Vernez said. “I think it will be great for the region and Santa Monica and the tourist economy.”

The Expo Light Rail Line will also feature the Bergamot Station that will be located near the intersection of 26th Street and Olympic Boulevard. Its inclusion will offer commuters the chance to reach the Pico district along the southern edge of Olympic Blvd.

In the meantime, the Big Blue Bus will be offering some new bus routes once the Robertson/Venice station is complete. This will allow for commuters to take a combo ride of light rail and bus to reach their destinations in the UCLA area and downtown Santa Monica.

“We’re currently planning to serve the Expo Robertson/Venice station to the UCLA area sometime after the completion of the station,” said Joe Stitcher, Chief Administrative Officer for the Big Blue Bus. “We are looking to change line 5 to that station. We’re (also) looking to change our line 12.”