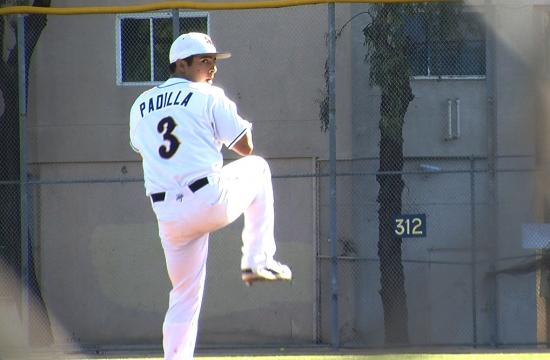 After a rough start to the season, the Samohi Vikings’ baseball team hosted their first Ocean League game against Hawthorne on Tuesday.

Senior Adam Padilla took the mound and worked his way through a complete game, striking out six and giving up only two hits as Samo shut out Hawthorne 9-0.

“The important thing for (Adam) is to start ahead (in the count) and work ahead with the batters,” said Samohi coach Sheldon Philip-Guide. “That way, when it comes down to two strikes, then we get to use our pitch instead of the hitter’s pitch. That plays in our favor as far as weak ground balls, pop-ups, stuff like that that makes it easy for our defense.”

While the Viking defense kept the Cougars at bay the entire game, Samohi’s bats struggled through five of the seven innings. But the fourth inning showed a pop in the bats that was more than enough to take the game.

Samo began the inning with their first seven batters reaching base and ended with eight runs in the inning.

“It’s just a matter of staying with our game plan and going up there aggressive,” said Philip-Guide. “They’re not going to blow any pitches by us with the guys they have, so our guys just have to be aggressive and wait for their pitch and then put some good aluminum to it.”

The Vikings hope to improve their bats in the next stage of the Redondo Tournament against South on Saturday.