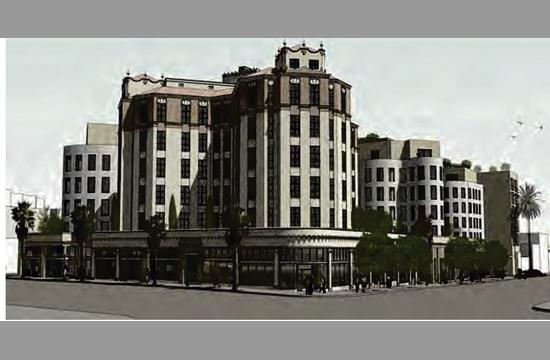 Whenever a developer enters into a development agreement (DA) with the City of Santa Monica, it understands certain concessions must be made before earning its zoning ordinance exceptions from City Hall. The developer of a proposed hotel just east of the downtown may have to make quite a large concession after a divisive vote at City Hall on Tuesday night.

That concession? A 65-cent per hour increase in wages for hospitality workers employed at the hotel.

The City Council knew it was in for a long night with the 710 Wilshire development – a proposed 285-room hotel on Seventh Street and Wilshire Boulevard – on its special meeting agenda on March 20. After nearly four-and-a-half hours of deliberations and discussions, the council narrowly voted for the 710 Wilshire DA to include a requirement to pay hospitality workers $11.29 or $12.54 per hour.

Those offered benefits would receive the lower rate.

Under the original proposal, the DA would have required prospective employees to be offered an hourly wage of $10.64 with benefits or $11.89 without.

Proponents who attended Tuesday’s meeting in Council Chambers in support of the future workers campaigned for a livable wage, a flat rate of $14.97 per hour.

Voting in favor of the $11.29 and $12.54 wages were Mayor Richard Bloom and Council members Bobby Shriver, Bob Holbrook, and Pam O’Connor.

The naysayers – Mayor Pro Tem Gleam Davis and Council members Kevin McKeown and Terry O’Day – all worried the approved hourly wages were not high enough for employees to afford to live in Santa Monica, meaning they would have to commute from a surrounding community and potentially exasperate the City’s traffic ills.

Interestingly enough, the going rate for those hired by non-local developers who have contracts with the City is $13.54 per hour, or $2.29 per hour more than the hourly wage for a prospective employee with benefits at 710 Wilshire.

A key issue in the debate on the dais was whether the imposed hourly wage would be so high as to place the developer of the proposed 710 Wilshire project – Maxser and Company – at a competitive disadvantage.

The four ‘yes’ votes were concerned that the $14.97 per hour suggestion would result in the project not being able to operate in the black.

Those in favor of the higher hourly wages said the developer and property owner, Alexander Gorby, will earn so much money from the enterprise that he could afford the $14.97 per hour wages. Even more, it was argued $14.97 per hour, or about $30,000 per year, was the bare minimum for an employee to work, live, shop, and enjoy Santa Monica.

Conversely, representatives of the Chamber of Commerce stated future hotel developers might avoid building in Santa Monica if the required hourly wages tickled the $15 mark.

Despite the 4-3 council vote, the issue is not fully settled, as the developer still has to agree to the recommended increase of living wages for future hospitality employees.

According to the staff report to council members, all projects in float-up discussions must include a living wage provision in its DA.

“The City has an existing Living Wage Ordinance but like the vast majority of cities in California and around the nation, the Ordinance is limited to ‘business assistance’ living wage where the requirement is triggered only if a private project receives public funding assistance, is a City contractor, or is providing a service on City property,” the staff report read. “Santa Monica’s Living Wage Ordinance applies to all contractors providing services to the City in excess of $54,200. The FY2011-12 wage rate is $13.54/hr.”

Also stated in the staff report – the DA must balance offering a living wage with ensuring that the proposed hotel is not placed at a “competitive advantage” as a result.

“The purpose of the living wage provision in the Development Agreement is to ensure that the proposed hotel provides its workers fair and reasonable compensation comparable to similar Santa Monica hotels and hotels in nearby communities without putting the proposed hotel at a competitive disadvantage,” it stated.