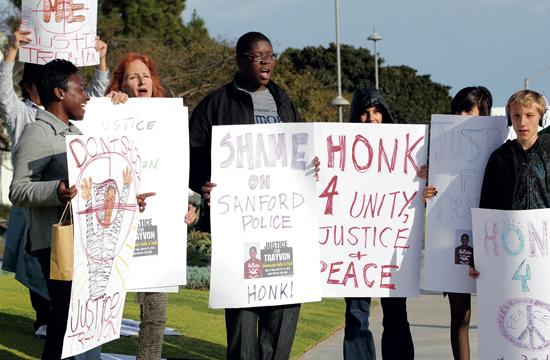 About a dozen students circled in front of Santa Monica City Hall on Wednesday afternoon in protest of the fatal shooting of black teenager Trayvon Martin in Florida last month that has captured the attention of the nation.

Protest organizer Gary Avrech said the students were hoping to show their discontent toward the “Stand Your Ground Law” in Florida that let Martin’s killer walk free.

Martin, 17, was shot and killed in an Orlando suburb by 28-year-old self appointed Neighborhood Watch Captain George Zimmerman on Feb. 26. The police department in Sanford, Florida, has come under fire for their actions in concerned communities around the nation including Santa Monica.

According to Avrech, the Stand Your Ground law that was passed in Florida in 2005 came about as a reaction to open gun laws where people felt that they should be able to not only walk around with their guns displayed, but should be given the opportunity to use them in cases of self defense.

Currently, the Stand Your Ground law in Florida states that a person is allowed to use deadly force in self-defense if they believe themselves to be threatened.

Avrech said the rally was the first act in community activism for many of the students.

The rally started at the Pico Youth & Family Center just after 4 p.m. with students holding posters and signs. They then proceeded down Pico Blvd. and onto Main Street to finish at City Hall, where they remained until 7 p.m.

“We wanted to get students involved with this because it is Cesar Chavez week and we are celebrating Cesar Chavez’s philosophy of giving a voice to the voiceless,” said Selina Rodriguez, Program Director for the Pico Youth & Family Center on Pico Blvd.

According to reports, Zimmerman claimed that he shot Martin because he was “acting suspiciously” while walking around the Florida neighborhood in a hoodie, and used the Stand Your Ground law in Florida to defend his actions.

In support of Martin, Rodriguez encouraged students at Santa Monica High School to distribute packets of the candy Skittles to other students in memory of Martin who apparently had bought a pack of Skittles before his untimely death at the hands of Zimmerman.

The candy is now being used as a symbol of injustice at youth protests around the nation.

Currently 10 other states have Stand Your Ground laws similar to Florida, but even though California is not one of them, Avrech believed the community of Santa Monica should get involved in the hotly debated national issue.

“It’s important that people here in Santa Monica get involved and talk about their feelings about this issue,” said Avrech, who is part of a number of organizations in the Santa Monica Community including the Martin Luther King Westside Coalition, the Santa Monica Bay Area Human Relations Council, and on the Community Resource Festival Committee. “We are trying to keep the focus on this issue until Florida and other states that have Stand Your Ground laws change so people can’t kill other people just because they feel threatened.”

Avrech is no novice to protesting against laws that do not protect civil rights of “life, liberty, and the pursuit of happiness.” He was part of the protests in Westwood as a teen during Vietnam War era of the 1970s.

Throughout his life, Avrech has had an interest in “giving a voice to those who are under represented.” He said it was now his chance to use his influence in the Santa Monica community to make others aware when a law needs to be changed.

He said he encouraged people to “peacefully protest” until their leaders act to change those laws.

“Students are the ones at risk because of what they look like and because of what they wear,” said Avrech. “They could be targeted, like what happened to Trayvon in Florida. There needs to be clear guidelines as to what Neighborhood Watch people can do, and if they are not allowed to do something and they follow that person (and kill them), they should at least be held, detained, and questioned.

Avrech said he disagreed wholeheartedly with the Stand Your Ground law that he believes “is so ambiguous and confusing that it tends to protect the killers and not the citizens.”

“Students need to feel safe in their community and on their campus,” Avrech said. “They shouldn’t be targeted for what they look like and what they are wearing. If someone is to be detained or arrested, it should be for committing crimes. In Florida that’s no longer the standard anymore. All you have to do is look threatening to someone and you can be killed and the police will let the perpetrator walk.”

Why the authorities in Sanford, Florida, allowed Zimmerman to walk is currently the question of the hour.

According to Avrech, this law “creates confusion for the police on how to proceed and unfortunately this can lead to people being killed.”