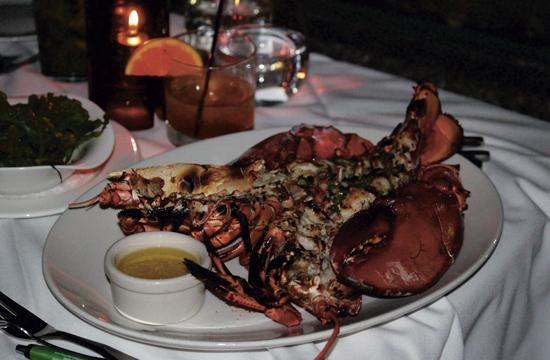 The Lobster, a seafood restaurant perched at the top of the Santa Monica Pier, provides an idyllic location to spend time sampling haut cuisine fished out of the waters of the Pacific Ocean that’s cooked and served with an ornate presentation of herbs and spices.

Chef Colin Crannell, who has worked at The Lobster for three years, brings advanced seafood culinary cuisine to the table by using artistic inspiration to augment his creations – and the end result is nothing short of spectacular.

The menu created by Crannell changes with the seasonal varieties of fruits, herbs, and vegetables purchased from the local farmers markets. His cooking is one of the main reasons The Lobster has become so popular since it opened its doors in 1999.

“The Burrata Cheese has a sweet bitter quality to it,” Crannell said. “It has all elements together. You have the sweetness, the creaminess from the cheese, and the sweet and bitterness, almost complex flavor of the braised radicchio, Bosc pear, and chive oil.”

The Salmon Tartar provides a crunch by the addition of some split croutons that do well to accent the soft salmon that is baked and then served with a delicate quail egg yolk on the top, Crannell said.

“I came up with it as a play on the classic dish Steak Tartar,” Crannell said. “So I put all the elements except for the Hungarian hot peppers, but I wanted the spicy element in there. I wanted it to have cornichons and capers just like the classic Steak Tartar. I also put a little bit of dill and chives in there and the little quail egg on top. You have to stir that guy in there and bring it all together.”

With 25 percent of the restaurant dedicated to chef space overlooking the sea, it’s no wonder why Crannell has been able to lose himself inside of his culinary arts and create not only a fanciful artistic presentation, but also provide the ability to pair sensual seafood flavors inside the comfort of luxury with the panoramic view of the Pacific Ocean and its ocean breakers as eye-candy.

“What we do is take some Hawaiian Blue King prawns and we leave the head on, and then we season them and sauté them and then hit them with a little bit of garlic and shallots,” Crannell said. “Then I add chili flakes, Brandi, and a shrimp button. It all comes together and we toast up bread and slather them with the sauce that is this little Italian special herb mix that we make out of Oregano, Thyme, Rosemary, and Parsley.”

Yet Chef Crannell, who admitted to being in love with mushrooms, has topped his prawn creation by embellishing mushrooms with his Seared New Bedford Day Boat Scallops bringing out its juicy shellfish flavor.

“I use Hedgehog mushrooms and black trumpet mushrooms both from Oregon right now,” Crannell said. “And it’s over a celery root puree. There are also a little diced celery root in there with it and a little green garlic from Tau Farms.”

The Lobster’s best selling dish, according to General Manager Jack Di Nicola, is none other than the simple Herb Grilled American Lobster.

“We split the guy open and grill it so it gets a nice caramelization on top,” Crannell said. “And then we put a little herb butter on it and serve it with garlic, butter, and lemon.”

Sides included Quinoa with Brussels, yellow carrots and a little bit of pomegranate to sweeten the vegetables adding both color and flavor.

Steamed Baby Broccoli from Routiz farms with some simple olive oil and a touch of shallots only added to the meal as side dishes.

For dessert, the sweet scone crumble of the Framstand Blackberry Cobbler is a must.