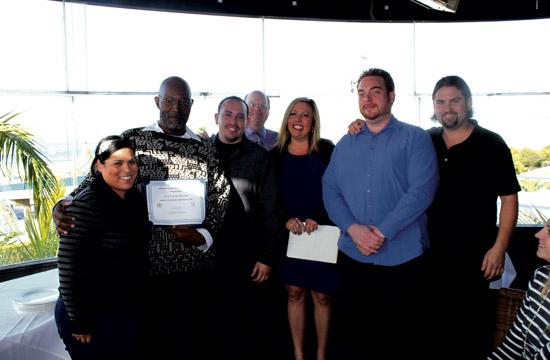 Step Up on Second was recognized on Wednesday morning as the team with the highest score (630) from the Super Bowl-A-Thon XVI held at AMF Bay Share Lanes on Pico Blvd. on Feb. 3. The Awards Breakfast was held at The Lobster to recognize the various businesses, social service agencies, and local government departments who came together for the event that benefited the Westside Shelter & Hunger Coalition. Pictured is the Step Up on Second team of Becky Enriquez, Steve Elam, Angel Amaro, Ron Davis (Sponsor, CapitalSource Banks Assistant VP), Lynne Thomas (event co-chair), Ryan Sudy, and Jeff Blizzard. The event featured 118 teams made up of 590 bowlers who helped net about $25,000 (the highest amount ever) through sponsorships, pledges, team registration fees, and door prize tickets.