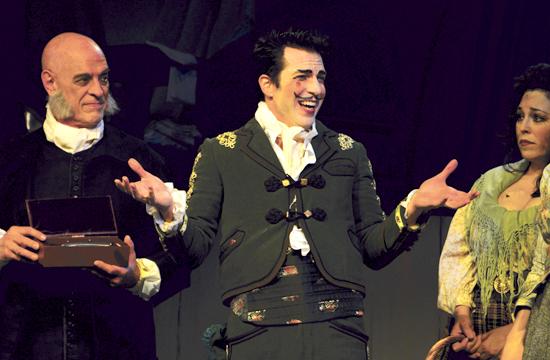 In the portion of town where Venice melts into Marina Del Rey, one will find a row of private residences wedged between a beach and a canal. These residences all are located along the ever so short Fleet Street. Thankfully, the Fleet Street crossing Pacific Avenue in the shadows of the Marina bears no relation to the fictional roadway of the same name featured in the Broadway musical “Sweeney Todd: The Demon Barber of Fleet Street.” Whether any demon barbers actually live on the Fleet Street located a few miles south of Santa Monica would be borderline blasphemy, equally as blasphemous would be to miss the latest rendition of the famous musical at the Morgan-Wixson Theatre.

With Fleet Street recreated on the iconic Santa Monica stage, the musical thriller captivates the audience from the opening number and keeps everyone interested until the final bow – even though everyone in attendance probably already knows how the story unfolds.

That story is based upon the adaptation of Sweeney Todd where a wrongfully jailed barber returns to London under a new identity. The former Benjamin Barker sets up shop on Fleet Street and, armed with his shiny razor blade, sets out to take revenge on a judge who robbed him of his life. Unfortunately, a few unsuspecting customers fall under Sweeney’s blade, causing the barber to further his demonic ways by partnering with Mrs Lovett. Soon, Sweeney is slitting throats while Mrs Lovett recycles the disposed bodies into tasty little meat pies devoured by her unknowing customers. Along the way, Mrs. Lovett tactfully left out a minor detail or two about the well being of Sweeney’s wife, an act that boomerangs back to haunt both the barber and his partner-in-crime.

Bringing the reenacted bone-chilling tale to life is quite the impressive Morgan-Wixson cast. John McCool Bowers masterfully portrays Sweeney, as the actor emits an angry, menacing presence combined with powerful vocals to deliver an awe-struck performance. Keeping the audience on the edge of their seats with her entertainingly conniving ways is AnnaLisa Erickson, who places her personal stamp on an otherwise well-defined Mrs Lovett. Tom McMahon is equally impressive as the uptight arm of the law in Beadle Bamford, while Vincent Perez and Natasha Harris make a solid contribution as Anthony Hope and Johanna. Lucas Moore draws a few qualitative laughs as Pirelli, while Joanna Churgin was perfectly cast as the Beggar Woman and Micheal Heimos is quite the believable Judge Turpin.

Beyond the acting performances, what is a musical without, well, music. Indeed, the Morgan-Wixson production of “Sweeney Todd” features several musical numbers that are sure to rise more than a few goose bumps. Among the most epic of numbers include the bookended items in “The Ballad of Sweeney Todd,” while “A Little Priest” is the perfect cliffhanger tune that not only serves as the perfect end to Act One but also beautifully portrays how Sweeney and Mrs Lovett scheme their impending evil ways. On the lighter side, “Pirelli’s Miracle Elixir” is as funny as it is fun.

Act Two opens up with the highly entertaining “God, That’s Good,” though one of the most memorable numbers is “City On Fire!” Through it all, “Sweeney Todd” features zero letdowns from beginning to end, as the musical’s strong production value, talented cast, and a well-designed set that is as sinister as it is dark makes this show a must watch.

Officially running as of March 10, “Sweeney Todd: The Demon Barber of Fleet Street” continues at the Morgan-Wixson Theatre, located at 2627 Pico Boulevard in Santa Monica through April 7. Tickets are $23 each.

More information about the show, including ticket availability, maybe found at the theatre’s Website at www.morgan-wixson.org.