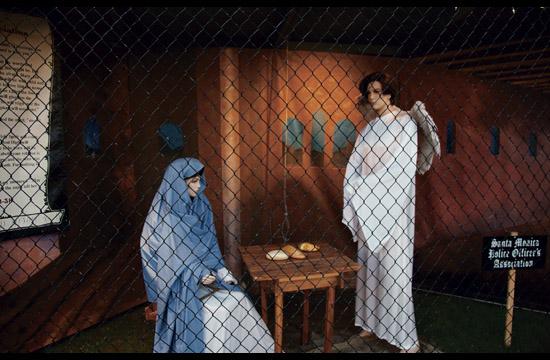 Supporters of nativity scenes at Palisades Park may have earned a slight reprieve on Tuesday night with City Council members holding off on deciding the fate of an ordinance that if adopted, would have banned the exhibition of any displays at any public place such as Palisades Park within the City of Santa Monica.

The council will consider the proposed ordinance again as early as April. Until then, those who seek to maintain a long-standing tradition of the public display of nativity scenes at Palisades Park each December must offer to City Hall alternative measures in lieu of the ordinance.

Council member Bob Holbrook requested the vote on the ordinance be delayed due to community input.

“I have received requests and emails from the public to continue (the winter displays agenda item),” Holbrook said, adding supporters of the winter displays “asked for more time” to consider an alternative to the prohibitive ordinance.

“I don’t know if it’s important we have to do this by early Spring,” Holbrook added, pondering if whether there was a “huge hurry” to have the ordinance voted on Tuesday night.

About 13 speakers submitted chits to address council members on the issue, but only a handful chose to actually speak. Others reserved their speaking time for when the ordinance returns on the agenda.

Council member Kevin McKeown said while he respected the requests for more time, he also hoped both his colleagues and staff would responsibly resolve the issue as quickly as possible in order to prevent a repeat of what happened in 2011.

“I think there are a lot of people for whom we have to be responsible with this,” McKeown said. “I want to make sure we take them all into consideration. I understand some people have asked for more time, but this has been a matter that we have been aware of since last Fall.”

What City Hall was aware of since last year was the debate that ensued after “requests for display space exceeded the space available.” Part of the debate involved the institution of a lottery system to determine which groups would be granted one of the 21 display spaces at Palisades Park.

Throughout the whole process, City Hall has hoped it would “ensure viewpoint neutrality.”

Some groups were unhappy that the lottery granted 18 of the 21 display spaces to those who either did not display anything related to “the Christmas story” or promoted atheism.

“The City established a content-neutral system for allocating display space, which utilized random drawing. As a result of the random drawing, most of the spaces went to applicants who installed displays that did not celebrate the Christmas story,” a staff report stated.

After the lottery, City Hall had “received a large number of complaints,” requesting on one end that no displays should be allowed to only permitting religious displays on the other end.

“Many residents and others complained about the resulting allocation, which did not afford space for the same number of nativity scenes as had been displayed in the past,” the staff report stated. “Other residents suggested eliminating displays altogether so that they could better enjoy the scenic view of the park and ocean.”

Moving forward, City Hall believed it was presented with only two options under the First Amendment: either continue to allow the unattended winter displays at Palisades Park with a content-neutral lottery system in place, or eliminate the winter displays altogether.

Staff ultimately drafted an ordinance that would, if approved by council, eliminate winter displays from any public park in Santa Monica. City Hall also stated it would be “both time consuming and costly” to maintain a lottery system.

The city code was amended in 2003, creating an exception to the general rule prohibiting unattended displays and allowing nativity scenes and other exhibitions at Palisades Park. A coalition of churches has erected 14 displays each holiday season to celebrate Christmas.

However, in light of complaints concerning the lottery and ultimate distribution of spaces, staff drafted the ordinance that was presented to council members on Tuesday.

In addition to the nativity scenes, other displays at Palisades Park have included, according to City Hall, Menorahs; atheists and winter solstice supporters have also presented displays.

City Attorney Marsha Jones Moutrie presented a pair of California legal cases to provide background on the city’s limitations in dealing with public displays in the context of religion and the First Amendment.