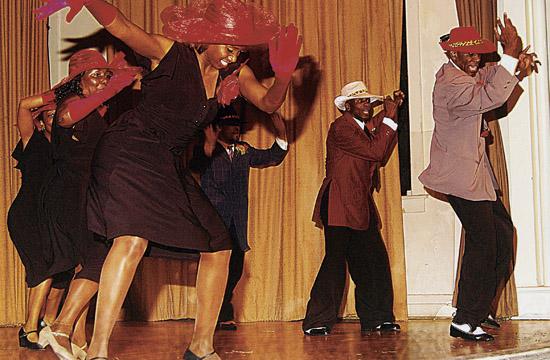 This joint was jumping as The History of Black Dance in America strutted its stuff on stage at the historic, 100-year-old Santa Monica Bay Woman’s Club located at 1210 4th Street. Brilliantly produced and directed by Ron Parker, the two-hour multimedia performance, in honor of Black History Month, was a “dance back” in time to the African roots of dance, and how it influenced dance in America, spanning the 1800s to today, beginning with a Zulu warrior ritual brought over from Africa by men destined to be sold into slavery.

Under Parker’s most creative choreography, the highly spirited and incredibly talented Central Avenue Dance Ensemble, as well as guest dancers, danced their way through African and African-American inspired popular social dances. Vintage film clips of such icons as Lena Horne, Fred Astaire & Ginger Rogers, and Vernon & Irene Castle, accompanied by a fascinating instructional narrative, augmented the live performances and covered the evolution of such dances as the “Cake Walk.” That dance was started by slaves on plantations to mimic high society and the winning slaves would receive cake as their prize, which is how the name evolved.

This gifted, high energy ensemble, dressed in appropriate, gorgeous period costumes, danced their way through 28 dances including “Black Bottom,” “Walking the Dog,” “Jazz Dance,” “Fox Trot,” “Charleston,” “Ragtime,” “Mambo,” “Samba,” “Lindy Hop,” “Swing,” “Urban Cha Cha,” “Bop,” “Disco/Hustle,” “Salsa,” and the fad dances of the 80s and 90s, as well as a rousing tap dance sequence. Most of the dances were preceded with an explanation of their derivation. Perhaps the most surprising revelation was learning that the most beautiful and sensual “Argentine Tango” evolved out of dancing by Black slaves who wound up in South America, calling themselves African Argentines. The dance team began with the original version and beautifully transitioned the movements into what we now know as “Argentine Tango.”

The evening, sponsored and hosted by Santa Monica Bay Woman’s Club, who gave the production needed support, was a joyous, fun-filled homage to the African roots of dance. In the spirit of continuing the celebration, at the end of the program, dancing continued in the upstairs ballroom of the club where some audience members put on their dance shoes and whirled away the rest of the evening.

A word about the Santa Monica Bay Woman’s Club: The club presents many cultural and civic events throughout the year, the next one being on March 30 at 7:30 p.m. called “For Freedom,” Taking a Stand Against Human Trafficking. The evening will include food, live music, keynote speakers, and a silent auction. For more information, call 310.395.1308 or visit www.smbwc.org.