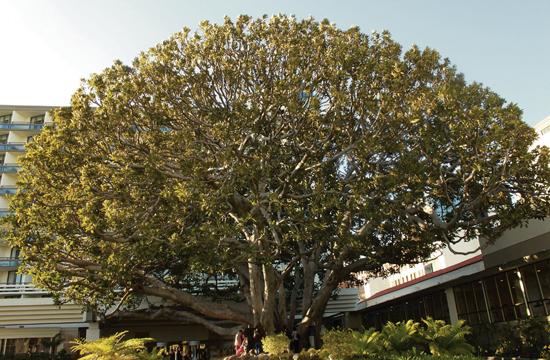 The organizers behind the fourth annual “Tree Hugging Day” in Santa Monica on Monday say the day was a success and that the communication between the City and residents in regards to the environment has improved “tree-mendously” from several years ago.

Santa Monica residents Jerry and Marissa Rubin gathered about 15 people between 5 p.m. and 6 p.m. on Monday around the historic 80-foot tall landmarked Moreton Bay Fig Tree, which was planted more than a century ago in what is now the courtyard of the Fairmont Miramar Hotel at 101 Wilshire Blvd.

Several years ago, Jerry said the idea was born after his involvement trying to save a number of trees on Second and Fourth streets in Santa Monica.

“It turned into a real tense fight,” Jerry said. “There was a lawsuit, I chained myself to a tree, I went to jail, I had to go to court, and I had to do community service and all those things. That was five or six years ago.”

After the debacle, he said he proposed to City Council that it create a commission or task force to improve the community process when it comes to protecting trees.

“They did that,” he said. “Former Mayor Judy Abdo is the chair of the Urban Forest Taskforce and they’ve been working tremendously. That intense period came more out of lack of communication than anything else and that has improved tree-mendously.”

To continue to keep the spotlight on trees and the environment, the Rubins decided to hold the first annual Tree Hugging Day in 2009.

“It’s very simple,” Jerry said. “It’s not a political event, it’s not an event where we are debating issues or debating which tree we like better, or how we are going to do something, but a way to show our love for trees. This is truly a hands on day of tree celebration.”

He said the Moreton Bay Fig Tree was the perfect location as it was “probably one of the most notable trees in all of the country and certainly in Santa Monica.”

“It’s a beautiful tree and I always thought this would be a great place to show our community unity as well as our commitment to showing love and appreciation for trees and our love for Santa Monica by doing this collective group tree hug around this tree,” he said.

Marissa said it was heartwarming to know there was so much camaraderie around the tree with like-minded people.

“The larger global environmental movement is growing,” she said. “Every time you do something it touches someone else and causes a chain of events that are positive for the earth and the earth needs a lot of healing now.”