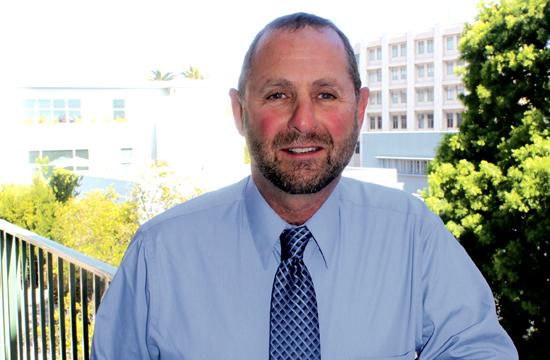 As Senior Vice President with PAR Commercial Brokerage in Santa Monica, Jeffrey Jarow specializes in leasing and sales in the office, retail, and industrial markets.

A Santa Monica resident since 1977, Jarow currently lives in the Ocean Park neighborhood with his wife Faye and his son Morgan.

He is a long-term Santa Monica Chamber of Commerce member dating back to the 1980s when he started his career in commercial real estate.

A few years ago, Jarow was asked to join the Board of the Main Street Business Improvement District where he is still active. About 10 years ago, he co-founded the Ocean Park Association and still sits on its Board today.

Jarow is also one of the planners for the July 4 Parade that has traveled down Main Street annually for the past six years. More recently, in 2011, the Chamber of Commerce and the City of Santa Monica joined their talents and created The Santa Monica “Alliance” where he serves as a Co-Chair of the Growth and Development Sub-Committee.

With a career in Commercial Real Estate Brokerage since 1983, how do you compare today’s commercial real estate market to when you first got into the business?

When I started in commercial real estate, there were no computer databases set up. We kept our own record for every building that was already built and did our best to keep up with all the new buildings being built back then. It seemed that in those days in Los Angeles, and the Westside, including West Los Angeles, Brentwood, and Santa Monica, that there was this incredible building boom. Money was everywhere! The economy was doing well. By the end of the 1980s however, things tightened up, and both commercial and residential markets were impacted. The real estate ‘gold rush’ ended, temporarily, of course. The Westside was always the last market in the country to be affected, but typically the first one to recover. As this popular destination began to grow again, and the economies expanded, so did the Westside real estate market grow and expand. More people moved to the Westside because of the opportunities, especially in the entertainment and technology industries. There were always new projects being built and many others being renovated to accommodate these new industries coming to our beach city. So many warehouses were converted to what is now known as “flex” space: one story warehouses with lots of open space and bow truss ceilings, skylights, and sand blasted brick walls. This new concept in the office sector was for people that worked non-typical hours, and wore non-typical work clothes with no suit and ties, and wanted non-typical workspace. Basically, a casual environment for the more creative types. With the office sector booming, the retail sector followed suit. More regional and national retailers started moving into the area to service the higher paid employees. You can see that especially now at the Third Street Promenade and the new Santa Monica Place.

What industry challenges have you had to deal with over the years?

I believe it’s the industry challenges that have always kept me and the other brokers motivated. Never a dull moment! Every day is different and has its challenges, but it also gives me the opportunity to confront those challenges head-on and find solutions whether its for the landlord and tenants, or the sellers and buyers that I represent. Santa Monica has one of the highest occupancy rates of all cities now, and as a result the rental rates have begun to rise again. Yes, the rates did drop when the economy softened, a reasonable correction, but they never ‘crashed’ as they did in other cities, and as the properties fill up again, there are fewer so-called ‘great’ deals. As the rental market improves, and vacancies dry up, the challenge today is finding that space your client needs. If the client is looking to purchase a new property, the challenge is finding a property they can afford.

What do you predict for the future of commerce real estate in Santa Monica?

I think it’s easy to predict the future of commercial real estate in Santa Monica. The Expo Light Rail is coming – for sure – in about three years. The LUCE (Land Use and Circulation Element) has been worked on by the community, in workshops, for the past six years and was finally approved recently, setting the stage for the future development of the city. Zoning ordinances are being worked on by the city’s staff and should be finished by the end of this year. New offices, retail, and housing will continue to grow especially around the Expo Light Rail Line stations at Bergamot, 18th St., and 4th St. in downtown Santa Monica. More hotels will continue to be built to accommodate the business travelers as well as the tourists.

Everyone wants to be part of our city. And why not? It’s a great City!

You have many strong ties to local non-profit organizations and you were appointed by the SMMUSD a few years ago to chair the Prop 39 Bond Oversight Committee. Why did you decide to get so involved within the community?

I was always involved in non-profits prior to my real estate career and enjoying the fundraising aspect of it. But 10 years ago, my wife Faye and I had a son, Morgan, and when he was of age to attend the Growing Place pre-school, I found myself getting more involved than ever, not just regarding fundraising, but accepting a position on their board as well. Shortly after that, as I began to get more involved with my local neighborhood in Ocean Park, there were many issues facing us, such as traffic, development, and homelessness, so I co-founded the Ocean Park Association (OPA). Since then, I seem to find myself being asked to join many Boards, Commissions, and Committees. I have been on the PTA Board at SMASH (Santa Monica Alternative School House), which is my son’s school. It’s part of the SMMUSD and this month the PTA is sending me to Sacramento to lobby on their behalf for our children’s education and funding. I will also speak on behalf of Child Development Services (CDS) here in Santa Monica as I am on the District Advisory Committee (DAC) for the CDS. More State money would be nice for starters.

A few years ago the school district’s Superintendent appointed me to Chair the Prop 39 Citizens Bond Oversight Committee. The purpose of Prop 39 was to make sure the “BB” Facility Bond Funds (close to $300 million) were being spent as the voters of our School District intended them to be spent. My son has been going to the YMCA for several years now, participating in the after school programs and summer camp. I’ve been on their Board too and have run their Annual Giving Campaign, which supports scholarships for children, families and seniors in need, so they can enjoy the “Y” as well. Sometimes I question whether I am doing this for myself or the legacy I am leaving behind for my son Morgan.

You mentioned your involvement earlier with the Convention and Visitors Bureau (CVB) and the Santa Monica Alliance and the “Buy Local” Campaign. How does this all equate to your real estate business?

The CVB is the tourism development agency for Santa Monica. It created the destination brand and markets the Santa Monica “brand” to potential visitors from other cities and international markets. What I think most people don’t understand about tourism in Santa Monica is the “positive” impact it has on our City. The hospitality industry that supports tourism employs about 10,000 jobs locally and about 6.5 million visitors a year spend in excess of $1.2 billion in our City. That equates to more than $34 million a year in TOT (Transient Occupancy Tax) that go to our General Fund and supports the City’s infrastructure, including the Police Department and the Fire Administration, Schools and Parks and other services. Tourism has grown exponentially here in Santa Monica causing people to want to come back and invest their money in businesses and real estate increasing the value in both.

The Santa Monica Alliance was created as a collaboration of the City of Santa and the Santa Monica Chamber of Commerce to retain existing businesses and attract new businesses to our City. No one wants to see vacant office or vacant retail space. So while most of the Alliance deals are within the office sector, I saw a need for the Alliance to also deal with the retail sector. I am now the Co-Chair of the Growth and Development Sub-Committee. The committee includes the department heads of Building and Safety, Planning and Information Systems Departments, along with real estate attorneys, architects, and brokers. The purpose of this sub-committee was to streamline the plan check process, so that new businesses can obtain building permits quicker and more efficiently, thus reducing the time it takes to open a new business in Santa Monica. We will be creating web-based, as well as printed, informational, and educational materials for the public to help explain the City’s Planning and Permitting requirements “prior” to opening up a new business in Santa Monica. Building plans and drawings can now be submitted electronically by both Mac and PC users. And, for internet accessibility, the City’s Information Systems Department (ISD) offers a low cost, 10 GB/second connection through its ‘dark-fiber’ system, which is incredible.

And finally, “Buy Local” is an important campaign that we should all support, as it is a concept of supporting our local businesses. We are creating a heightened awareness within our community, and collectively we are building a strong and local economy, which supports our City’s services and our public schools.