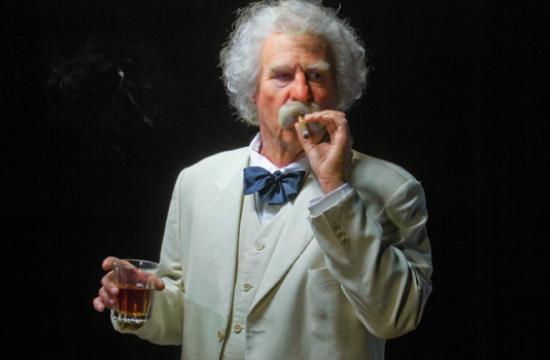 Religion supposedly does not mix with science or politics. Even worst, religion may be, at best, a distant thought in Hollywood – unless, of course, one views Scientology and Christian Science as valid schools of thought. Then there is Mark Twain, who, despite his Presbyterian background, would have taken critical issue with any of the above.

In fact, Twain did have his opinionated takes on politics, the sciences, and, yes, Christian Science. Some of the acclaimed author’s thoughts and views will be coming back to life this week, more than 100 years after his death, when Val Kilmer brings his one-man show, “Citizen Twain,” to the historic Masonic Lounge at the Hollywood Forever Cemetery from March 30 to April 11.

Kilmer, who made a name for himself on the big screen in films such as “Top Gun,” “Tombstone,” “Batman Forever,” and “Heat,” will be taking the stage as Samuel Langhorne Clemens himself, developing a one-man act that “delves into the heart and soul of Samuel Clemens and conjures forth the great spirit of Mark Twain, America’s greatest storyteller.”

According to the press notes, “Citizen Twain” is “deeply entertaining, with great wit, song and prose, the play weaves Twain’s biographical themes into a play that proclaims and takes joy in the marvel of words, which, as Twain says in the play, ‘Form the ladder to my heaven.’”

Each show will be followed by a question and answer session with Kilmer, who is making his return to the stage after starring in several off-Broadway performances. Among his most renowned theatrical performances here in Southern California was his rendition of Moses in “The Ten Commandments: The Spectacle Musical.” Serving as the show’s writer, director, and actor, Kilmer set “Citizen Twain” in the Gilded Age of America” and presents Twain’s relationship with Christian Science founder Mary Baker Eddy. It has been widely circulated that Twain was one of Eddy’s most ardent critics, but despite the contrast in personalities, there was more than met the eye in the duo’s relationship.

In bringing the Twain-Eddy relationship to the stage, Kilmer continues the theatrical legacy long associated with Samuel Clemens. “The Adventures of Huckleberry Finn” has played out on many a stage for nearly a century.

The Masonic Lodge at Hollywood Forever Cemetery is located at 6000 Santa Monica Boulevard, Los Angeles 90038. To view the show’s schedule or to purchase tickets, visit hollywoodforever.ticketfly.com.