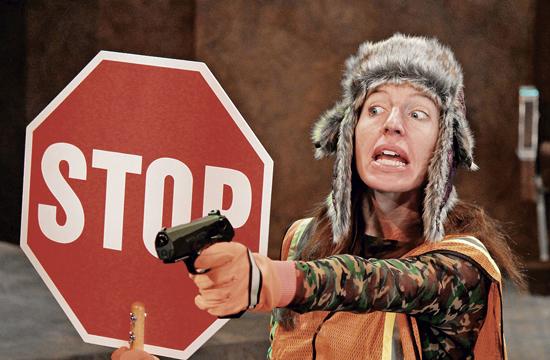 You know a production is in trouble when the only positive comments you can make are that technically it was well staged on a most creative set and light design by Joel Daavid and a wonderful original score by composer Edward Auslender, performed by a talented quintet who participate in the action. One would be hard pressed to find much more to compliment on Claire Chafee’s dreary “Why We Have A Body,” a Rainbow Theatre Company production currently being performed at the Edgemar Center for the Arts.

The play, directed by first-time director Tanna Frederick, best known for her work as an actor in a variety of Henry Jaglom productions, plays Mary, a highly dysfunctional, spastic of a woman who likes to rob convenience stores. Throughout the proceedings, Mary obsesses about Joan of Arc saying that it wasn’t the burning that was so terrible, but the fact that she was naked in front of all those people. She takes us through her pathetic childhood, talking at length about her absentee mother Eleanor, played by the very lovely Barbara Bain, who gives a solid performance and commands the stage like the pro she is. Bain is wheeled on and off the stage by two cute attendants in a series of “vehicles,” ranging from an ancient-type covered conveyor, to a canoe, and on horseback, each representing the part of the world she is currently exploring to try to find herself. She ruminates about her life, trying to make sense out of being a woman, and about her failures as a mother.

Fredrick’s portrayal of Mary is like watching someone perform with early Parkinson’s Ticks, and grimaces and shameful mugging seem to be the foundation of her character, who, by the way, wears an assortment of ridiculous hats so that the term “Mad Hatter” would certainly be appropriate. Frederick is a talented actress who just needs to be reined in so that she doesn’t repeat the same Sandy Dennis-type mannerisms over and over again. As far as her direction, which shows some promise, with the exception of Miss Bain, she did not help her actors develop fully actualized characters as, for the most part, they played the text with no sub-text foundation.

Finally, we have Mary’s sister Lili, a lesbian lawyer played by Alex Sedrowski who clearly has potential. She specializes in trapping husbands who cheat on their wives. While on an airplane, she meets Renee, a heterosexual woman played by Cathy Arden, who eventually dumps her husband, “comes out of the closet,” and engages in a relationship with Lili.

I’m not even going to mention the absurd scene where Mary talks to her sister Lili from prison using soup cans with strings much like the commercial you’ve probably seen on television where the chef receives a call from his mother. It works as a commercial, but considering there is a telephone on Lili’s desk, it’s pure foolishness in the context of this production. If there was any symbolism here, it escaped detection.

Whether it was poor direction or flaws in the script, you don’t much care about most of the characters and find yourself wishing for the next musical interlude.