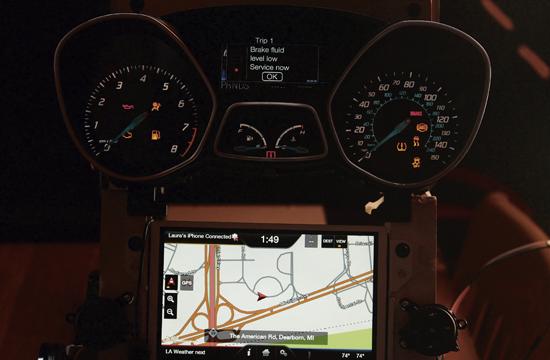 Ford, along with its technology partner Nuance, have upgraded its voice recognition systems with the addition of their new Chester Mod 4 Touch Bot that advances and updates its 2011 technology found inside of their new Focus, Escape, and Fiesta 2012 models.

Its upgraded voice recognition system seems to have been cleaned up of all the bugs.

As part of Ford’s Women Technology Month, a trio of women representing Ford spoke with The Mirror on Tuesday, following a Women Engineers breakfast at the Georgian Hotel in Santa Monica.

Together, they shared their story of Ford’s voice recognition history and what to expect by the end of the year with the upcoming 2013 My Ford and My Lincoln Touch systems.

“We are moving towards the mobile application feature within the My Ford Touch,” said Burek. “It’s the next phase of the system.”

Currently, there are roughly 10,000 voice commands that are compatible and found within Ford’s select 2011-2012 models of the Focus, Escape, and Fiesta and upgrades to the initial 2011 system have been completed.

“This is our performance upgrade that will fix all the bugs,” said Burek. “Once you say find an address to the system, it comes back and asks you to say the street address including the city all at once.”

The pre-programmed system uses a simple C+ coding application that enables owners of these cars to have a talking dialogue with the system instead of one word or single sentence commands.

“We can control our radio stations, Sirius systems, or find a POI (Point of Interest),” said Burek. “You don’t have to piecemeal it, you can say it all at once and it works flawlessly. You can route to a destination by using your voice to say the street address as it sounds.”

For those concerned with rising gas prices and going green, Burek pointed toward the future of the voice recognition systems that will soon be found inside of their automobiles by 2013 saying that Ford will soon have “a battery electric vehicle that is going to be coming out before the end of the year.”

The current voice recognition upgrade in their electric cars with the Chester Mod 4 Touch Bot means that Ford will be able to “support voice recognition as it works in an electric vehicle just as it is in a gas vehicle,” and that “less structured commands,” will offer owners a more “natural way to talk to the system.”

“Our first generation sync that’s on our Focus, Escape, and Fiesta already supports the mobile applications,” said Burek. “It is a feature that is much quicker to do by your voice and is able to do while you are driving.”

The addition of internet applications such as Pandora, I Heart Radio, and I-Tunes directly streaming from a cell phone means that soon Ford owners will be “able to say the command ‘play album greatest hits’ by (specific artists such as) U2.”

Ford cars “will definitely take the use of the application from the phone and tie it into the stream,” said Burek. “It will either be a connection through the USB port or Blue Tooth and you won’t have to take your eyes off the road or hands off the wheel to do things.”

Currently the select cars have Unsupervised Speaker Adaptation technology built into their systems.

“It listens to your voice and tunes the recognizer to your specific accent,” said Burek. “The minute it hears something different, it clears out the system and adapts to the new user. Right now, it takes about three or four commands to do that.”

Ford is also driving the future of its company banking on voice recognition technology not only to augment the drivers of their cars, but their assembly workers as well.

Baron is the woman who makes sure everything in Ford’s cars will be perfect by interacting with the design before it gets put onto the assembly line.

Strong consideration of user interface is taken by Ford by adapting their workplace to include Virtual Reality in the design of the interior control panels of their cars.

Stephens also does her part once the cars go to the assembly line.

“We focus on extremes when we do our designs,” said Stephens. “I use the motion capture immersion to set up an assembly plant.”

Stephens takes into account everything from the “biggest guy’s hands,” to the “smallest woman’s hands” when setting up her “productive, safe, and efficient assembly line” that takes into consideration the “joint torque fatigue” of the muscles of its workers.

With all this new technology literally at Ford’s virtual fingertips, it is no wonder why the women of Ford expect their product to dominate the American car market in 2012 and are playing a vital role in Ford’s future.

“It’s not Kit from Knight Rider yet,” said Burek. “But we’re getting there.”