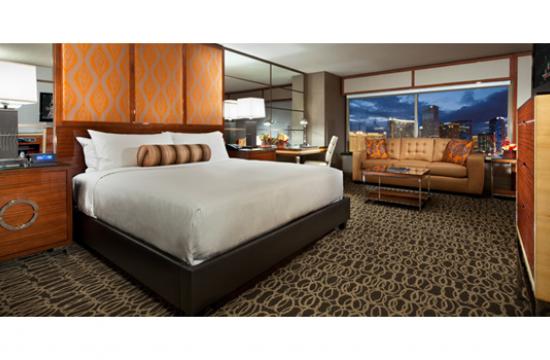 At a cost of $160 million, all of the hotel’s 3,570 guest rooms and 642 suites in the main tower will be given a facelift with all rooms expected to be completed by this September.

Already, more than 700 rooms are completed and available for reservation.

In addition to a collection of beautifully remodeled guest rooms and suites, MGM Grand recently announced that the Brad Garrett Comedy Club, Sugar Factory, and Blizz Frozen Yogurt will join the hotel’s array of amenities.

“Our incredible new room design, combined with the addition of these venues, is just the beginning of our grand renovation,” said Scott Sibella, president and COO for MGM Grand. “We have many more new offerings on the horizon, all of which will further solidify MGM Grand’s position not only as an entertainment destination, but as a premier hospitality experience.”

Creating a sense of excitement and anticipation upon arrival, MGM Grand recently unveiled a new interactive video wall – the first of its kind in a Las Vegas hotel.

Located behind the front desk in the hotel’s grand lobby, the center screen streams a live Twitter feed for any guests, on or off property, who use the @MGMVideoWall handle.

The stream allows guests to provide direct feedback to the hotel and participate in real time polls, contests and chatter, creating a fun, interactive experience for all passersby.

Guests are invited to visit www.TheGrandRenovation.com for more information and updates about MGM Grand’s new rooms and suites.