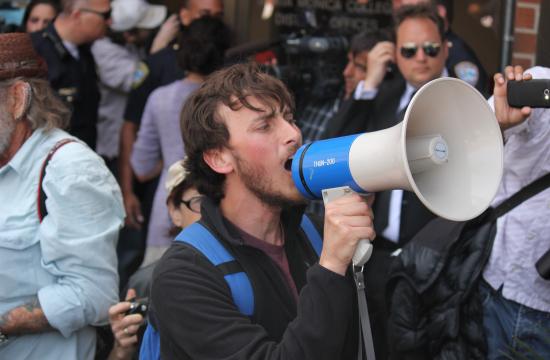 After they were not allowed into the Board of Trustees meeting on Tuesday and the chaos that ensued, students at Santa Monica College against the two-tier education plan took to the streets and sidewalks of Pico Boulevard as their space to speak as they marched to the college’s district office on Thursday afternoon.

The students were not pleased with SMC president Dr. Chui L. Tsang’s statement on Wednesday in response to Tuesday’s violence at the meeting. They asked Tsang to come out and answer to his statement, but Tsang was not in the building. This led the protesters to jeer “coward” at the building.

According to Mirror reporter Roger Morante, the main doors were not only blockaded by Santa Monica police but also chained and locked from the inside.

SMPD public information officer Sgt. Richard Lewis said the city police was on the scene as a precaution due to the college police being understaffed at the scene.

Click HERE for more information and context about the protest.