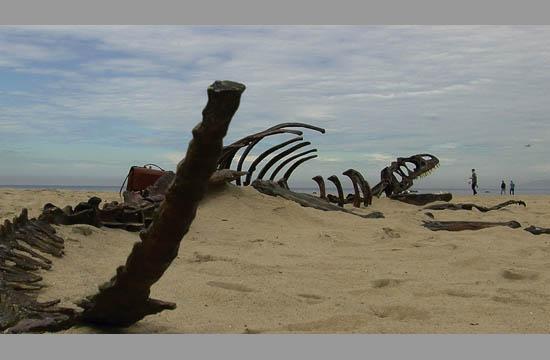 As the sun rose over Santa Monica State Beach on Wednesday morning, residents, runners, and tourists alike probably did a double take when they saw a replica of ancient fossils assembled together to represent the Albertosaurus. The skeletal structure of the large Tyrannosaurus Rex-like dinosaur – which spanned up 30 feet when it was alive – rested in the sand as part of a promotion to promote tourism to the Alberta, Canada.

An eponym of the province it was discovered in, the Albertosaurus meandered across Alberta during pre-historic times. The replica, lodged into the sand just north of the Santa Monica Pier, spanned 27 feet from nose to tail.

Local school kids lined up throughout the morning to grab a prolonged peek at the relic, with a pair of British tourists sneaking in between for a photo opportunity. Vendors on the Pier looked down upon the sand and occasionally passed jokes about how could a dinosaur shore up on the beach.

When onlookers were finally able to take their eyes off the large-scale replica Albertosaurus, they were able to observe real artifacts a few feet away. The sharp teeth of one dinosaur doubled as a steak knife. The lower jaw of the Albertosaurus imposed images of the potential wrath experienced by its prey.

The Canadian province maintains a steady pipeline of tourists from California, with many locals visiting Alberta’s most populous metro centers of Calgary and Edmonton as well as ski resorts in Banff. However, the Travel Alberta campaign hopes to redirect many tourists to the southern portion of the province, where, at their peak, dinosaurs freely roamed.

Some of those dinosaurs are on display at the Royal Tyrrel Museum; Dr. Francois Therrien curates the dinosaur artifacts there.

“The species lived 70-75 million years ago,” Therrien told The Mirror, adding the dinosaur was discovered in Alberta 1989. “(Alberta) is one of the best places in the world to find dinosaurs.”

Travel Alberta, the marketing arm of the provincial government, can be followed on Twitter (@TravelAlberta) or Facebook (www.facebook.com/TravelAlbertaCanada).