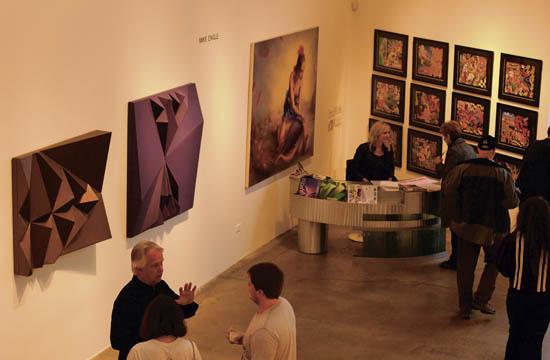 ArtLA celebrated its grand opening on April 21 at Santa Monica’s Bergamot Station to a large reception of gregarious art lovers who formed a nexus inside the complex while mingling around the number of professional pieces that adorned the walls of the art center.

“I want you to get close and realize that a hand was here,” said artist Otto Sturcke who draws all his art in charcoal and pastel. “Rembrandt was the one who said paintings aren’t for smelling or sniffing.”

The art event offered the unique opportunity for those in attendance to utilize the enthralling space to interact with many of the artists who made themselves available to talk about their creative techniques used in their art pieces.

Sturcke took his inspiration from nineteenth century realist artists. Upon first glance, it was easy to mistake his drawings for a photograph.

“I’m trying to emphasize a Zen mood in ‘Twilight Parallel,’” said Sturcke, referring to his charcoal drawing of a coy fish called ‘Twilight Parallel.’ “It really is about walking into the unknown, into the darkness and so forth and it is a solo journey into space.”

Sturcke’s drawing of the coy fish in Twilight Parallel seems have a sense of movement, and at the same time, a sense of stillness.

“I enjoy doing the very fine details,” said Sturcke. “I am using bold black shapes to emphasize forms over everything else.”

On the opposite wall, Engle, an artist fascinated with “triangle shapes and geometric squares,” was on hand to interact with patrons who found his sculptures entrancing.

“The themes are really big, bold, and complicated,” said Engle.

In order to make his pieces he first makes about, “fifty sketches and blind drawings.”

Engle, who is now retired, used to work in the metal business in California, and “has always been fascinated with geological formations.” This is why he invests his creative time in these projects.

Oil artist Murray chose to focus her works on realism and uses beach objects such as seashells to make political statements about the marine environment.

“I have always been an ocean lover and part of group called art versus oil where we donate some of our money to clean the birds in the gulf,” said Murray. “It’s a political statement for me just to show the beauty of nature and to get people to focus in on that beauty and help preserve it.”

In the back, a private room was offered to clients who wanted to buy art, and in the adjoining “Neon Room” antique neon twentieth century collectables were available for viewing.

“We have an antique room filled with neon signs and rare antiques dating back to the 1900’s, and everything you see is original,” said ArtLA Co-founder Heidi Gray. “ArtLA has been growing so quickly that we had to take over our own brick and mortar space and this is our grand opening. We even have an original Bob’s Big Boy.”

Gray explained that part of her museum was a collector’s area where interested buyers could relax, have some champagne, and be treated to a private showing of art that could be selectively viewed and purchased.

“It’s a nice way for people to come in and not be hassled by anyone else,” said Gray. “They can also have some nice food and nice drink, and relax while being shown works of art.”

The Perfect Night Out with WE Drive-Ins