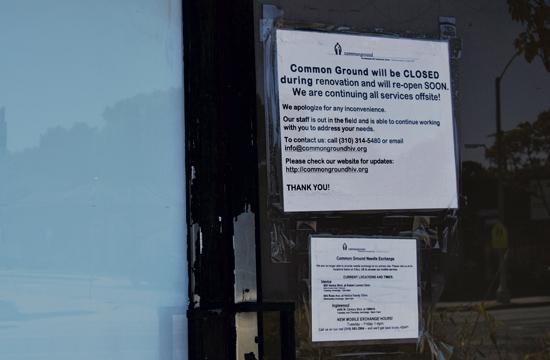 It appears Sunset Park residents were unable to find any “common ground” with an HIV education facility’s homeless youth program, as the non-profit Common Ground announced this week its intentions to set up its Homeless Youth Prevention and Education (HYPE) operations in neighboring Venice.

In addition to announcing that its youth homeless services would be offered outside of Santa Monica’s city limits, Common Ground also stated that its longtime executive director, Lisa Fisher, was no longer with the non-profit HIV community center after seven years of service.

“One program, known as HYPE or Homeless Youth Peer Education Program, will be conducted outside of our Santa Monica location. We will be able to offer an increase in the services offered to this vulnerable population,” Jeff Goodman, Common Ground’s interim executive director, told The Mirror in an e-mail.

Goodman added that while HYPE is shifting to Venice, other services at Common Ground’s Santa Monica facility would continue offering other services.

“Our new facility in Santa Monica will provide us with a nicer and larger facility to better serve the needs of all of our clients, including youth, who will still come for services such as testing, case management, and mental health,” Goodman told The Mirror.

A memorandum from the Cedar Community Coalition to the Santa Monica City Council last month stated area residents supported Common Ground’s overall mission, their “primary concern (was) the safety of the people that live near Common Ground’s potential site and the schools that are very close by.”

The memo further stated to council members “Common Ground should be located away from any residential neighborhoods … and particularly away from a site that is within 1,200 feet from five schools, including three pre-schools.”

Goodman told The Mirror he is cognizant of the community’s concerns, but that HYPE is being shifted to Venice because of an opportunity to service its clients better. He also said the new Common Ground facility in Santa Monica will make every effort possible to coexist with the surrounding neighborhood.

“I know the HYPE program was a concern of many neighbors. Its relocation did not come about directly as a result of their request but rather was, in my judgment, fortunate timing where we found we could better provide for our participants elsewhere and at the same time, allay some of the concerns by the neighbors,” Goodman wrote to The Mirror. “I am very hopeful that once Common Ground re-opens, the new neighbors will get to know us better and together we can work to support a safe and hospitable neighborhood.”

Local resident Zina Josephs told The Mirror she was pleased to see Common Ground shift its homeless youth program away from the non-profit’s new site at the corner of Lincoln Boulevard and Cedar Street.

“Since most of the complaints we heard from residents and business owners and managers near the former Common Ground location seemed to be related to the HYPE participants, we’re relieved to hear that Common Ground staff won’t be recruiting homeless youth from Venice Beach to come to 2401 Lincoln,” Josephs said.

She also added the Friends of Sunset Park (FOSP) is working with Common Ground to find a happy medium for the non-profit to maintain its operations at Lincoln and Cedar without worrying its neighbors.

“The Common Ground Board and FOSP are still negotiating a Good Neighbor Agreement. If Common Ground commits to limiting hours of operation, to not implementing the needle exchange and HYPE programs at 2401 Lincoln, and to providing appropriate security, I believe we’ll be able to reach an agreement,” Josephs wrote to The Mirror.

Common Ground’s move to 2401 Lincoln has been the subject of intense debate, which struck a fever pitch in late February when more than 50 Sunset Park residents aired their respective concerns at a community meeting to Santa Monica’s elected officials and city staff.

The non-profit was previously located a few blocks up Lincoln Boulevard near Pico Boulevard.