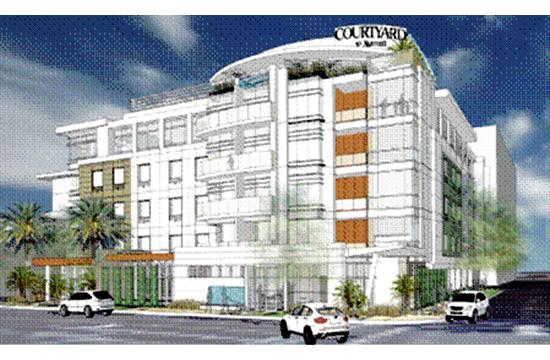 Two well-established hotel brands may soon have destinations in a stretch of one of the most desired locations of all Southern California, a move the Santa Monica City Council hopes will further establish the coastal municipality as the ultimate hot sport for tourists visiting the Los Angeles basin.

Marriott’s Courtyard and Hilton’s Hampton Inn and Suites both took the first step in erecting world-class facilities in the downtown after council members on Tuesday preliminarily approved the hotels to move forward with their respective plans.

If ultimately approved, both hotels would be located at Fifth Street and Colorado Avenue, or one block east of Colorado Esplanade and the Expo Line terminus. In all, both hotels would bring 269 guest rooms to the downtown by 2015, virtually coinciding with the planned completion of the Expo.

“The purpose of this ‘float-up’ review is to enable a pro-active preliminary discussion with the City Council regarding the proposed land use, project design, compatibility, and potential community benefits of the project, and to evaluate whether the City shall proceed with Development Agreement negotiations,” a staff report stated.

Interestingly enough, a Development Agreement (DA) for both projects has not been finalized and, accordingly, community benefits are still being negotiated.

Placing both proposed projects underneath an even bigger spotlight was the fact the agenda items – which were labeled as discussions of concept plans for proposed DAs for two six-story hotels – were preceded by an extensive debate during a study session on clarifying community benefits in the context of development agreements.

Yet another twist that would guide how council members would approach the potential developments was the fact that another proposed hotel at 710 Wilshire endured an arduous debate on providing a sustainable living wage as a community benefit as part of DA negotiations.

Indeed, Mayor Pro Tem Gleam Davis pointed out it was only fair that City Hall require that both Marriott and Hilton provide a minimum livable wage for each respective hotel’s future employees.

Three weeks earlier, some community members and labor groups requested council members to require a developer to pay nearly $15 per hour for hospitality employees at the proposed hotel development at 710 Wilshire. Though they settled on a lower wage, council members appear to be establishing a precedent of requiring hotel developments to pay a minimum livable wage for future employees in exchange for the developer receiving certain zoning ordinance exemptions.

A livable wage is essentially a minimum salary an employee would have to earn in order to live in Santa Monica and not have to commute in from neighboring cities or communities.

The Landmarks Commission is considering the adjacent auto body structure as a historic location.

As for design plans, both hotels are still in preliminary stages and both developers expressed a willingness to work with City Hall in drafting up the final plans for both hotels.

The proposed Courtyard by Marriott features 131 guest rooms and 78,750 square feet of floor area. It would be approximately 69 feet in height – more than twice that allowed under current zoning laws – and features 80 to 100 subterranean parking spaces, a bistro and bar, lounge area, and standard guest and business amenities.

Conversely, the Hampton Inn and Suites is a proposed 72-foot tall, six-story building with 138 guest rooms and, just like the Courtyard, 78,750 square feet of floor area with 80 to 100 subterranean parking spaces.

Planning Commissioners expressed some concerns of the initial design plans when they collectively reviewed the float-up for both hotels.

“During float-up review of the project, the Planning Commission expressed concerns with the project’s design, specifically the conceptual style, ground floor design and uses, and vehicular access,” staff stated in its report. “The Commission’s design comments primarily emphasized building design unique to Santa Monica, the surrounding context, and its location as a ‘gateway’ entry into the city by motorists and pedestrians.”

Commissioners also hoped that since the hotels were so close to the Expo Line terminus, they “should include a stronger pedestrian-oriented ground floor design with commercial uses and open space … that would serve future light rail passengers and Esplanade pedestrians.”

Both buildings have been described as “modern/contemporary” in design.

“Specific colors, siding, windows, and overall materials have not been refined as the project is currently in early stages of re-design,” the staff report stated.