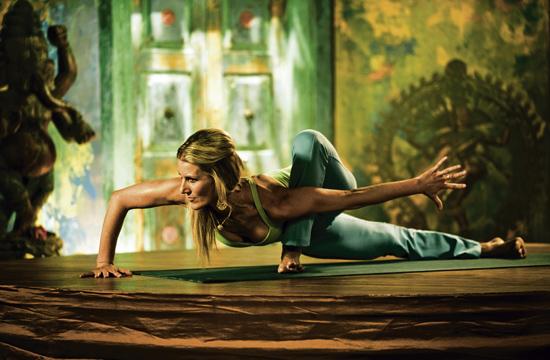 Santa Monica plays host to the first annual Tadasana Festival of Yoga and Music this Earth Day weekend with the large-scale yoga and music event set to connect teachers and musicians from around the world with local community.

The festival started on Thursday night with live music performances and continues today through Sunday with yoga classes and lectures with the spotlight also on music in the yoga world.

Tommy Rosen, a Kundalini yoga teacher and co-producer of the festival, said Santa Monica was the epicenter of yoga in the world right now.

“More people per capita are teaching and practicing than anywhere else,” Rosen said. “That is a fact and yet in Los Angeles, there is no major festival, event, or conference where people come together to celebrate the incredibly rich practice of yoga that’s here.”

Rosen and long-time friend Fabian Alsultany first set out to change that a year ago when they first discussed creating the Tadasana Festival.

He said their goal was to bring together as many yoga teachers from around the world to celebrate the practice in Santa Monica.

“We wanted to bring world music culture here as well,” he said. “In the world of yoga, there is a big crossover with music. When you go to yoga classes, a lot of teachers are playing music live in their classes and this is literally going on all over the world. A lot of the music that is played is emotional music or what falls in the ‘world artists’ category with musicians from India, Africa, South America, Europe, and from North America. You have these artists that are regularly being played in yoga classes all over the world. So we thought wouldn’t it be amazing to bring these artists here in Santa Monica where they can perform live concerts with these teachers at our festival. We thought that is pretty amazing and pretty unique.”

The festival will take place in the parking lot where Ocean Park Boulevard meets the beach. A marketplace will be set-up that’s free and open to the public today through Sunday that will feature food stalls and showcase environmentally friendly companies and their products.

Anyone who wants to attend any of the yoga classes or lectures at the festival must purchase tickets, which are available as passes for one, two, or three days.

Rosen said yoga classes would run from 8 a.m. to 7 p.m. each day with special events being held at the Santa Monica Bay Woman’s Club after dark with performances from renowned yoga teachers.

“It’s really a time for the whole city to come together,” he said. “It’s really a very special thing when you can bring together 60 yoga teachers, 30 musicians from around the world, 30 lecturers, 70 companies that are all participating. It’s really going to be a monumental gathering and one of the biggest the city has seen.”

And as for the name of the festival, Tadasana translates from Sanskrit as “mountain pose.”

It is the primary standing yoga position: the place from which the entire physical experience begins.

The line-up for in-class performances is led by Gnawa artist Hassan Hakmoun, premier vocalists Morley, and AnnMarie Solo. The list of renowned kirtan and mantra singers also has great depth. Scheduled to perform are the Mayupuris, Donna DeLory, Wah!, Momo Loudiyi, Aykanna, and Guru Singh among many others.

“The goal is bringing a community together, strengthening them with a positive experience, and inspiring them to be even better than they were before,” says co-producer noted world music impresario Fabian Alsultany. “The wellspring of inspiration comes from our outstanding yoga teachers, incredible musicians and, most importantly, the community of participants coming together.”

General admission yoga passes, which include access to all festival classes, are on sale now at http://tadasanafestival.frontgatetickets.com.