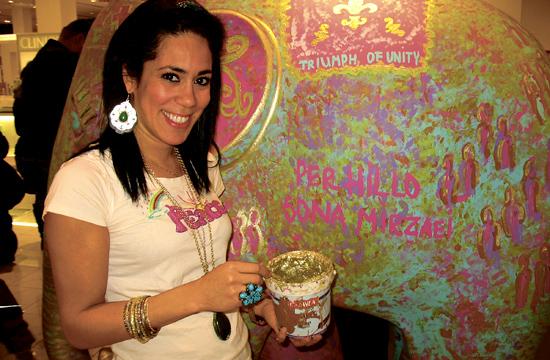 Mirzaei, a Los Angeles-based contemporary artist will be showcasing selections from her Tales of Copenhagen series. Mirzaei began working on this series while she was in Denmark participating in the exclusive international art project Elephant Parade – raising awareness and funding for preserving endangered Asian elephants.

Being the only American artist chosen to be a part of the Elephant Parade, Mirzaei was thrilled to offer her talents to such an important cause. Working all day on her elephant, she would then forge ahead inspired by the day’s activities and paint all evening on her Copenhagen series during her time in Scandinavia.

When asked about the subject matter of this series, Sona explains, “The paintings tell the story of my experiences in Denmark while I was working on my elephant Triumph of Unity for the Elephant Parade. The colors are representations of the various moods I experienced while creating work in a place that was entirely new to me. I’ve done a lot of traveling but I’m also a California girl at heart who is addicted to sunshine, and suddenly I found myself in a position where I was working on the other side of the world in the dead of winter, so I definitely think there are elements in the paintings where I was trying to bring a bit of that fun-loving warmth into the work because it reminded me of home.”

This is the first time Mirzaei has exhibited her work at the Jeanie Madsen Gallery.

Sona said both parties were excited to join forces.

“I am super excited to play a role in such a great marking of success for Jeanie’s gallery,” she said. “It truly is a great opportunity for any artist to showcase their work during a gallery’s anniversary. I think it will be a fantastic exhibition and I really look forward to the opening.”

The Jeanie Madsen Gallery features fashions and wearable art accessories at the gallery as well as a special fashion installment.

Madsen said she had plenty of plans for the future.

“I’d like to open a second location in New York City,” she said.

Fashions and accessories in the show will be by Fahmina as well as Madsen and Mirzaei.

The opening reception will be held from 7 p.m. to 10 p.m. The event will feature a DJ, refreshments, a wine bar, and appetizers.

The Jeanie Madsen Gallery is located at 1431 Ocean Ave., Santa Monica. For more information, call 310.393.7436 or visit http://jeaniemadsengallery.com or www.sonamirzaei.com.