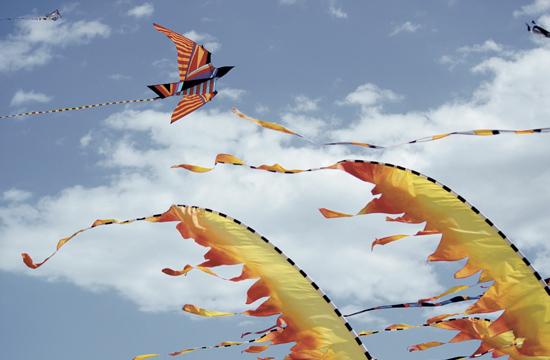 More than a thousand people, neophytes and expert kite flyers alike, participated alongside renowned kite artists who drove in or flew in to Santa Monica in order to share their love for the art of kite flying against the backdrop of the Pacific Ocean this last Saturday and Sunday.

Multicolored kites of birds, bees, and centipedes juxtaposed their brilliant colors against a crystal blue sky that seemed painted with wisps of clouds – the remnants of a recent storm – during the first Annual Kite Festival held directly north of the Santa Monica Pier last weekend, April 14 and 15, from noon to 5 p.m.

“It’s a community event, a kite festival,” said Rich Shelton, Director of Integrated Learning at Otis College Art and Design who managed the event. “We’ve invited artists from all over the United States to come in and fly their kites today. We bused in kids and any family that showed up was welcome. The thing that is great is that we are next to the pier and the boardwalk.”

Organizations such as the Urban Compass, the Junior Blind of America, and St Jude Children’s Hospital also participated in the highly successful event.

“We went through 200 kites with the kids on Saturday alone,” said Shelton.

Creative kite designs were the standard and many flew their kites overhead with blustery west winds keeping the innovative designs aloft and kite variety coming not only from the expert kite artists on hand, but also from the hundreds of kites flown by the numerous children who had constructed and colored their own kites at a free workshop station staffed by volunteers of Otis Art College.

“We all came to pay homage to one of the great masters which is Tom Van Sant,” said Fuijino. “He is a scientist, artist, and sort of a funny little Leonardo Da Vinci.”

“Tom is the mentor and these are the students from 35 years later,” said Shelton who credits Van Sant with being the father of the modern kite.

The legend of this “father of the modern kite” has grown over the years and even at 81 years young, Van Sant’s benevolent nature and passion for kite flying served as a paternal inspiration for other notable kite artists who came to fly their kites at the Kite Festival.

“I have always enjoyed flying kites myself,” said Sean Finn who answered Van Sant’s call to fly a kite and was a former student at Otis. “I have always driven around with a kite in the back of my car wherever I went and when I find an open field and I have some spare time, I go fly a kite.”

“I wanted to build this kite and a fragment of a DNA molecule came to mind,” said Ken Conrad who flew down with his wife Suzanne from Seattle to share his scientifically designed kite and be part of the event.

“I wanted the best and most artistic and most creative kite makers from around the United States,” said Van Sant when asked how he was able to gather so many expert kite artists in one place.

Van Zant’s presence and benediction seemed to add a sense of awe and reverence for the art of kite flying with the next generation of kite artists eager to help the hundreds of children who could be seen running around with their own handmade kites immersed in a sense of glee from their creations.

Where did the legend of Van Zant begin?

Van Sant is a native to Los Angeles and received his MFA from Otis College in 1957 and went on to became part of the faculty there teaching fine art classes from 1960-1966.

Van Sant elevated his artistic status in the 1970’s after he broke stride with the antediluvian Mary Poppins-styled paper and stick kite, and became the first to use the modern materials of fiberglass tubing covered with nylon fabric in his kite construction which then elevated the flying of kites into an art form with his creations and innovative designs.

“I became concerned with the structure of kites and of putting a beautiful color in the sky made out of nylon,” said Van Sant. “It was 1975 and I felt really tired of making things better this way or that way and was basically concerned with why the damn thing wouldn’t fly. Now I’m here 37 years later so when I got asked to come back here I said, ‘good idea, let’s go do it.’”

“All the credit goes to Tom Van Sant, who literally was one of the forerunners of the art kite movement way back in the 1970’s,” said Ali Fujino Executive Director of the Drachen Foundation in Seattle who gave kudos to Van Sant and even devoted his Website to the “increase and diffusion of knowledge about kites worldwide.”

Throughout the years the legend of Van Sant has only grown and advancing kite construction is not the only notch to be proud of on his belt.

After his teaching stint at Otis, Van Sant went on to create a number of other conceptual art projects including the famous kite based “Jacob’s Ladder” in 1974, a collaborative project with NASA called “Reflections from Earth” in 1980, and Smithsonian World’s satellite reflection project called, “Desert Sun, Desert Moon,” in 1986.

In 1989, Van Sant played an instrumental role in the Geosphere project that created the first satellite map of earth amongst other numerous contributions to society but the one he is remembered most for by his loyal fan base is passing on his love of flying kites.

When asked why he had dedicated so much of his life to flying kites Van Zant said, “I just enjoy the kites.”