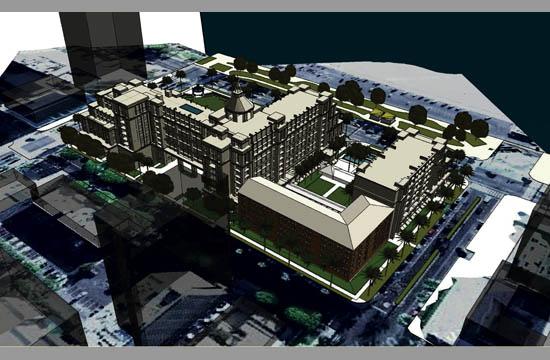 If currently proposed plans to tear down and rebuild the Fairmont Miramar Hotel and Bungalows are allowed to move forward, then downtown Santa Monica will, depending on what side of the fence you sit on, either become a boon for coveted tourism dollars or renamed “Miami: West.” Santa Monica’s City Council expressed its view in a 6-1 vote, and members on the dais overwhelming believing the proposed Miramar “revitalization project” will indeed be that boon enhancing the city’s status as a leading tourist destination.

Evident at City Hall on Tuesday evening and into Wednesday morning was a clear line of demarcation separating the pro-development contingency who believe a newer, larger Miramar will result in millions of dollars filling Santa Monica’s coffers and an anti-Miramar campaign contending the hotel’s renovations plans are too bulky and would adversely affect the surrounding community.

Though the April 24 council action was far from a final decree, the 6-1 vote indicated that Santa Monica’s elected officials were in favor of the proposed project despite several people attending Tuesday’s meeting at City Hall protesting how large the new look Miramar would potentially be should the plans ultimately be approved.

One attendee who arrived mid-way through Closed Session conducted, based on a precursory scan of the blue or red stickers worn by almost every member of the capacity crowd inside Council Chambers, an unofficial count of those favoring (blue stickers) or opposing (a red “Stop” sign sticker) the Miramar expansion. By his observation, about 60 percent of those sitting inside the chambers opposed Miramar’s current plans.

A much larger crowd, the stance of each person not anecdotally accounted for in any capacity, observed the meeting from City Hall’s lobby and mezzanine.

Members in both camps hoped to make its respective case be known to council members even though the Miramar agenda item on Tuesday night was a “float-up,” where elected officials interact with staff, the developer, and members of the public to discuss how best move a project forward.

“Friends of the Miramar,” a group claiming to be more than 500 members strong, distributed blue stickers for its supporters to wear and, as a unit, made its case to council members that the hotel’s plans would greatly benefit Santa Monica.

Among its points in support of the Miramar’s increased size were: more than tens of millions of dollars in tax revenues; improved community via corporate responsibility; improved parking; consistency with the Land Use and Circulation Element (LUCE); inclusion of affordable housing; historic preservation of the Moreton Bay Fig Tree; inclusion of union jobs; the creation of 150 new jobs; and, being a pedestrian- and bicycle-friendly hotel.

Sea Colony resident Mike Gruning pointed out that the Miramar’s expansion plans provided both a community benefit via its affordable housing plan and would help revitalize the immediately surrounding area with the potential for ground-level businesses along Wilshire Boulevard and Second Street were positive community benefits.

“They’re going to revitalize the area by having retail on Wilshire and possibly Second Street, which will increase sales tax and bring tremendous revenues to the city,” Gruning told The Mirror. “Plus, it’s going to be all good-paying union jobs.”

Sohrab Sassounian, owner of The Huntley directly across from the Miramar, told The Mirror while he is not opposed to his neighbor’s renovations plans, the proposed expansion goes too far.

“It’s not a hotel project. It’s a condominium project,” he said. “The project is too bulky, too big, too tall.”

Another concern: residents just north of the Miramar believe a larger development will attract way too many automobiles to an area that is already congested.

“I’ve lived in Santa Monica for 31 years and I don’t want to see it change in the way this building project might make it change,” Eleanor Blumenberg, who lives near the Miramar, told The Mirror. “I live on top of the California Incline. I see it backed up now. It’s going to be absolutely ridiculous. Very unrealistic and selfish.”

“There’s a 45-foot height limit that they are not supposed to exceed,” Zbur said. “They are just wholly ignoring it.”

The developer has offered City Hall four alternatives after planning commissioners earlier this year expressed concern about the project’s size.

Interestingly enough, the project’s square footage remained the same in each alternative, with the way the space was allocated throughout the property being the only deviation.

The proposed square footage: 556,000. That space would include four buildings, 265 hotel rooms, 120 condominiums, just under 500 subterranean parking spaces, retail space along Wilshire Boulevard, and one-acre of open space. The current Ocean Tower, which is 10 stories tall, would be demolished; a new 12-story, 133-foot tall tower would be erected in its place.

Also proposed are structures of 70 and 122 feet, respectively.

Currently, the Miramar sits on 4.5 acres, is home to 296 guest rooms, and is just above 262,000 square feet in space. The tallest structure currently on-site is 10 stories tall. There are only 167 parking spaces on site.

Not happy with the lack of variation among the proposed alternatives, Council member Kevin McKeown was the sole opposing vote.

The other six council members expressed support of some of the projects proposed community benefits, such as local hiring and providing living wages to hotel employees.

In all, about 80 speakers addressed the dais in support or opposition of the Miramar project.

The meeting ended with expansion plans moving forward but with stipulations, such as: further refinements of design plans; reducing the size of one of the new towers by three stories while increasing the height of another; and, making a final determination on the number of condominiums to include in the new development.

MSD Capital, L.P., owns the Miramar, which is located on the corner of Wilshire and Ocean Boulevards.