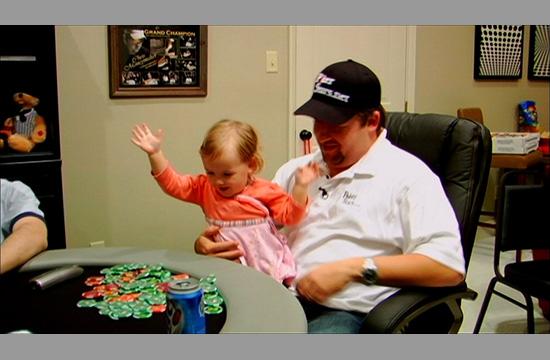 Amid an economic recession and challenging job market, it’s hard not to look at Chris Moneymaker’s $39 investment in 2003 as one of the smartest financial decisions in recent memory. Living up to his last name, the Tennessee native used that money to enter an online Texas hold ’em tournament and win a seat in the prestigious World Series of Poker championship in Las Vegas. His seemingly implausible story, which is the subject of the new documentary “All In: The Poker Movie,” ended with a first-place finish and $2.5 million windfall.

“For a long time, it was surreal,” Moneymaker said recently during a phone interview. “When I won the World Series, the first thing that came to my mind, you hear all the stories about people two years later, three years later, they’re busto. They lost all of it – poor spending, poor habits. My plan was to … be smart about the money and not risk it.”

“All In: The Poker Movie,” which opens at the Laemmle Monica 4-Plex on April 13, tracks Moneymaker’s underdog story and the overall boom in Texas hold ’em play.

For many of the talking heads in the film, the story of this accountant-turned-professional-poker-player serves as a milestone in the gaming industry.

Moneymaker was an average guy living a debt-laden life in Tennessee.

He proved that with the right combination of skill and luck, a person could travel to Vegas, compete in the big leagues and walk away a millionaire.

The WSOP win has brought him fame, fortune, and even a catch phrase – the “Moneymaker Effect,” which is used to describe similar Cinderella stories.

“I just signed a deal to be a lead instructor for (World Poker Tour) Boot Camp,” he said. “I’ve got an endorsement deal where I represent a poker room up in Erie, PA. I’m developing a poker app game for the iPhone and Android.”

But all hasn’t been dollar signs and gold bracelets.

On April 15, 2011, the poker industry took one of its largest hits in history.

On that day – a day many players remember with vivid memory – three Internet poker companies found their executives indicted for bank fraud and money laundering when the Manhattan U.S. Attorney’s Office and FBI stepped up efforts to enforce the Unlawful Internet Gambling Enforcement Act.

“These defendants, knowing full well that their business with U.S. customers and U.S. banks was illegal, tried to stack the deck,” said FBI Assistant Director-in-Charge Janice K. Fedarcyk at the time.

The idea of sitting in one’s pajamas in front of a computer screen and turning $39 into $2.5 million became impossibility.

Moneymaker said he saw the tealeaves in the monumental decision and made some changes in his life.

“April 15 was sort of a blessing, in the fact that it woke me up,” he said. “I need to do some things other than just sticking in the online space.”

“My guess is that it’s going to happen sooner rather than later,” he said. “It’s not a matter of if; it’s a matter of when.”

In the documentary, director Douglas Tirola follows the often strange genesis of Texas hold ’em, examining everything from Matt Damon’s influential 1998 movie, “Rounders,” to the early days of the industry when cowboys like Doyle Brunson gave the world its first poker personalities.

Throughout the story, a common thread is the difficulty of sustaining success in an industry that relies heavily on luck.

In the years since his 2003 championship, Moneymaker has tried to play conservatively.

As Moneymaker and other professional poker players await what they consider the inevitable legalization and regulation of online poker play, millions of hopefuls head to Las Vegas and poker rooms around the world hoping to catch a hot card on the river. Moneymaker’s recommendation to all those wanting to follow in his footsteps: Never look back.

“I want to do it again,” he said of his World Series of Poker championship. “I’m not going to be the high school quarterback that looks back at his high school game and is proud of that. I want to do better things in the future.”