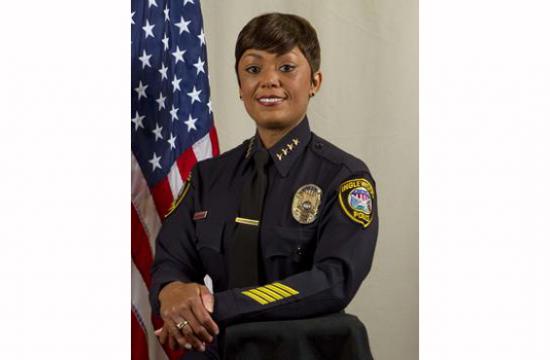 Santa Monica City Manager Rod Gould made the announcement today that Seabrooks, a 25-year veteran of the Santa Monica Police Department and Inglewood Chief for the past four and one-half years, was chosen after a three month, nationwide search.

Pending finalizing the hiring process, she will take charge of the Santa Monica Police Department in May, 2012.

“I am equally honored, humbled, and excited to accept this offer to work in the Santa Monica community as its next Chief of Police,” Seabrooks said. “I am particularly happy to be joining a community that is so involved and leading a Police Department with great achievements in public safety. ”

Gould said with extensive experience in both field operations and administration, Seabrooks has covered the spectrum of public safety posts from traffic safety to tactical commander, information technology to department collaboration with community partners. Gould said she has a strong track record in leadership, fiscal management, and skill training initiatives.

“I am delighted to announce that Chief Seabrooks will return to Santa Monica to complete her remarkable career in law enforcement,” Gould said. “Twenty five years in the Santa Monica Police Department, rising from Police Officer to Captain and holding numerous specialty assignments in between, have prepared her well to lead this department. Jacqueline Seabrooks’ four and one-half years as Chief of Police in Inglewood have tested her and proven her metal. While at Inglewood, she has provided great service to that community in stabilizing and improving law enforcement services, despite tremendous external scrutiny and budgetary pressures.”

“Chief Seabrooks distinguished herself in the selection process. I believe that she is the right person to lead the department in this second decade of the new Century and to make an already high performing Police Department even stronger. Chief Seabrooks has deep ties to the community and members of the organization and will be very active and highly engaged with both. Her integrity, leadership, and judgment have been validated consistently over her nearly 30 years in law enforcement. We are fortunate that she will return to do her best work yet in Santa Monica.”

The City went to great lengths to seek top candidates for the Chief of Police from throughout the nation.

The candidate pool was deep in executive level experience in some of the premier law enforcement agencies in the United States.

It included development of a tool to screen the initial paper applications and phone interviews down to the five candidates who undertook a full day Assessment Center on March 27.

The Assessment Center involved six exercises designed to replicate day to day challenges for the Police Chief in Santa Monica. The exercises were scored by specially trained raters from the community and organization. At the conclusion of the Assessment Center, the two top performers underwent additional interviews with the City Manager, City Attorney, and key staff.

As Chief of Police, Seabrooks will receive a salary of $238,752. She will manage a department with a budget of more than $70 million and 443 employees, including 215 sworn spread across the divisions of Administration, Operations, Special Enforcement, and Criminal Enforcement.

She is a member of several professional associations including the International Association of Chiefs of Police, and she serves as a board member of the California Police Chief’s Association.