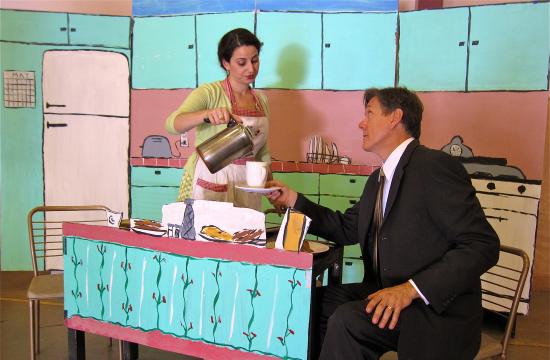 Pacific Opera Project is bringing back its critically acclaimed production of “Trouble in Tahiti” to the Miles Memorial Playhouse in Santa Monica.

Four performances have been slated for the Miles Memorial Playhouse this weekend to ride on successes of the production previously held at the Santa Monica Playhouse.

Trouble in Tahiti gives the audience a day in the life of Sam and Dinah, an everyman couple who live in a little white house in Anytown, USA. Their seemingly wonderful life — “Real solid silver, wine in the soup, two-door sedan and convertible coupe” — hides the real truth of Sam’s egomania, Dinah’s depression and the seething contempt in their relationship.

There’s lots of “Trouble” and a little “Tahiti”.

Bernstein, who wrote the lyrics and music, masterfully weaves a score filled with both laughter and heartfelt emotion.

A pre-show review of Bernstein’s most popular broadway melodies gets things started.

The show runs 75 minutes including pre-show.